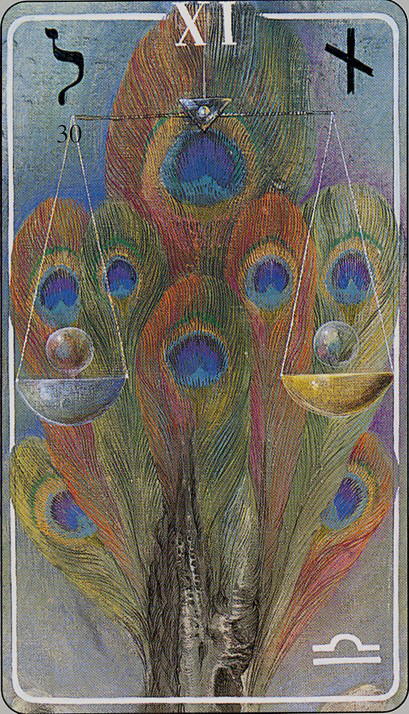 Like many of the images in The Haindl Tarot (published by U.S. Games), the Justice card has usual elements in a composition that includes iconic symbols. Here scales appear with their message about the importance of balance in attaining Justice. But these scales float before the the eight eyes of peacock’s feathers. This is a far-seeing face of Justice.In her companion book to the Haindl Tarot, Rachel Pollack explores the rich layers of meaning offered by these feathers, including:

Though the feathers display many colors, violet and indigo predominate. The colors of the two highest chakras, they indicate the evolutionary quality of Justice. These two chakras are the crown, for spiritual openness, and the third eye, for awakened understanding.

Instead of emerging from the body of the peacock, the feathers appear rooted in a tree trunk. On either side we see the top of a stone, hinting at the mass of the Earth. This suggests that spirit does not exist apart from nature.

This face of Justice shows a way of operating that calls us to move from a connection with the Greater Whole. This connection may begin through attuning to cosmic energy, the Divine, that which is unnamable and invisible, but must end in just relations and a balanced sharing with the actual people in our lives at a local, national, and – now that we live on a planet of truly intertwined systems – global level.

The peacock also appears on the Haindl Tarot’s 2 of Cups. This shared symbol unites Justice and Love. With her usual gift of making unusual connections, Rachel Pollack brings the idea of fantasy into the mix of meaning for both these cards, writing:

The peacock here is a fantasy bird. It emphasizes the importance of fantasy in love.

To love, we must engage our imaginations both to seek out loving relationships and then to stay in them through drama of upheavals and the boredom of the daily round.

Justice, too, calls us to engage our imaginations. Justice may be a perfect ideal, but here in the real world, we so often find ourselves falling short. Today, lies are the language of those at the highest levels of government. Black men are murdered with impunity by agents of the state. A panel of men creates policy in secret that eliminates resources needed for the health of women.

But even in the times when we feel furthest from Justice, we need to believe in its possibility (and there is a historical model that shows when we feel like we are failing, we are about to win.) We need to nurture fantasy. We need to visit the Justice in her space of imagination and vision, to believe in her power rather her diminishment. We need to listen along with the writer Arundhati Roy who says: “Another world is not only possible, she is on her way. On a quiet day, I can hear her breathing.”