The arrival of the new moon stamps the moonth with an initiating energy that shifts and develops through the cycle of growth, fullness, and descent. The reading of the moonth can be done any time, ideally between the new and full moons. Revisit the cards you pull periodically up until the next lunation to gain new insight as the light changes. This new moon arrived August 30th (exact at 6:37am ET in the USA) . The full moon arrives September 14th.

As the season turns, we are nearing a completion here in the Northern Hemisphere. The landscape is still lush and the fields full, but growth has slowed. The sounds have shifted; the birds are quieter and the cicadas’ hum solemn. We are turning toward the final harvests.

The August 30th new moon astro-Tarot correspondences also point us toward this theme of completion as we are invited to walk the path of the Hermit,Major Arcana number 9, the last single digit.

Hermits turn from the demands of the everyday world and embrace solitude to seek the wisdom within. Paradoxically, this looking inward also tunes them into the wisdom that flows from natural cycles, the Greater Than, and all that is beyond themselves. They integrate their personal insights with the larger patterns to find an understanding of the Whole. 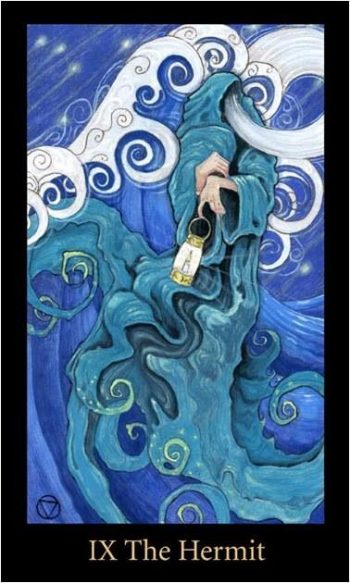 From the Mary El Tarot, now available in a second edition

Once in touch with their Inner Wise One, Hermits are called to return and share their insight with others. The lantern that is so common in versions of this card signifies this responsibility. Their periods of solitude are not permanent but periodic. They are still called to serve the communities from which they come, to respond to the needs of the world in which they live.

Being numbered 9 is apt for this card because to embody the archetype of the Hermit is an achievement that marks a cycle of growth’s completion. We may not be as old in years as the figures shown on Hermit cards, but we still have aged our wisdom selves when we’ve embraced a Hermit time.

So the path of the moonth calls us to completion, but there is still work to do before we are finished.  Our passage of the moonth takes us through the 8 of Pentacles.

The call of this card is: Keep at your work. In the fields, we will only have enough for the winter if we do the harvest and prepare the stores now. For our spiritual life, faithfulness to our practice is what truly tends our soul. With our activism, the troubled times we live in show us a world in need of our tending and healing. We hear the voice of the 8 of Earth in Maya Angelou’s words: Nothing will work unless you do.

And how shall we do this work? What will we look like as we travel the path? The correspondences of the moonth invite us to be explorers and questers devoted to the earth, traditionally known as the Knight of Pentacles.

These exploring, questing Knights are devoted to their cause but move at their own pace. Noel Arthur Heimpel writes about the earth Explorer of the Numinous Tarot: While, like the other Explorers, there is movement in this card, it’s much slower. [They] are someone who takes their time, never rushing or making any hasty decisions. They want to have all the facts in place before they come to a conclusion.” 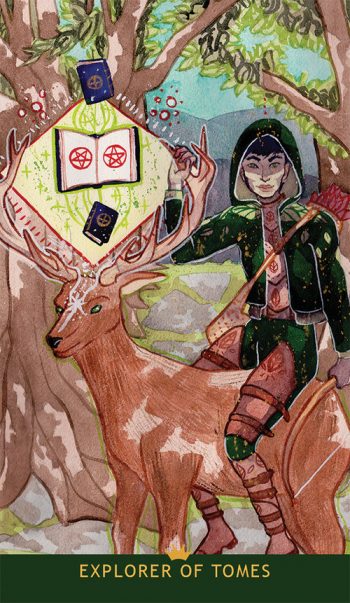 The Numinous Tarot’s version of the Knight of Pentacles (This fabulous deck is on sale right now.)

This description and the earth connection of all of these cards has me thinking about Greta Thunberg, the Swedish teenager who a year ago began school striking on Fridays to demand action on climate solutions with her consistent weekly presence outside of the Swedish parliament. What began as an individual action, has sparked a global movement of young people, who are now calling for a Global Climate Strike September 20 – 27. Knights tend to travel in groups. They know they are stronger together.

Invited to speak at the United Nations in New York on September 23rd, Greta took 2 weeks to sail across the Atlantic rather than fly because of air travel’s heavy use of fossil fuels. Her travels will continue by bus and train through the Americas to reach Chile where the United Nations Climate Change Conference will be held in December. She travels at the pace set by her principles.

Greta Thunberg is certainly a dedicated Knight serving the earth, but she is also the Hermit. In describing the origins of her activism, she says she first learned of climate change when she was 8 years old and didn’t understand why more wasn’t being done to address this global crisis. She became depressed and stopped speaking for awhile. This time in the dark was the impetus to begin her school striking. Now she speaks to the world and helps to lift up the voices of other young people. Her light spills from her lantern when she tells us: Our house is on fire. I am here to say, our house is on fire. … I want you to act as you would in a crisis. I want you to act as if our house is on fire. Because it is.

And what about you? Who are you – the Hermit or the Knight?

Having passed the 50 year mark, I can claim some Hermit wisdom. I’ve journeyed through the dark to bring back the light I found there. But in this moonth to come, better to be a Knight in service to the young Hermits who want to secure a future for themselves and the planet. They are calling everyone to participate in the Friday stikes on the 20th and 27th. They are welcoming adults who want to act as allies. I can follow and support them as a steady Knight of Pentacles.

The figures of the Tarot are shown in images that focus us on particular aspects for better understanding. But we are not a static card, but rather a complex mix of experience, abilities, and passions. We are the Hermit on the mountain top, the worker with the pentacles, and the Knight unfailing in service all at the same time. When we embrace, blend, and express these multitudes within to match the needs of the moment, we can be more resourceful. With increased resources, we just might find we have what we need to do the work, to achieve our visions, to reach completion.

Reflection and reading questions of moonth to call for the resources from the multitudes within are:

HERMIT: What message does my inner Hermit have for me about how to keep at my work during this moonth/cycle?

EARTH EXPLORER: What message does my inner Explorer have for me about how to keep at my work this moonth/cycle?

INTEGRATION: How do I integrate these messages to serve the Whole (of which the Self is a part) during this moonth/cycle?

I offer this as an e-reading in my collaborative intitituve format for $23. I have times to do these readings generally on Monday, Wednesday, and Saturday. Sign up with Pay Pal or email me about sending a check. When I receive notification, I’ll be in touch to let you know about when to expect to receive your reading by email.

The work of cultivating the joy isn’t completed just at the time of the new moon. When the full moon comes on September 14th open to an encounter with the mystery of The Moon. People on my list receive more timely new moon missives and often full moon inspirations for ritual as well. Sign up if you’d like to receive those.

Note: I’ve given some some shout outs above to decks and companies. FYI, I”m not receiving any fees or goodies for these. I just think they are great decks and want you to know about them.