Soul Shaping Path of the Moon
Walking the Way of Imagination 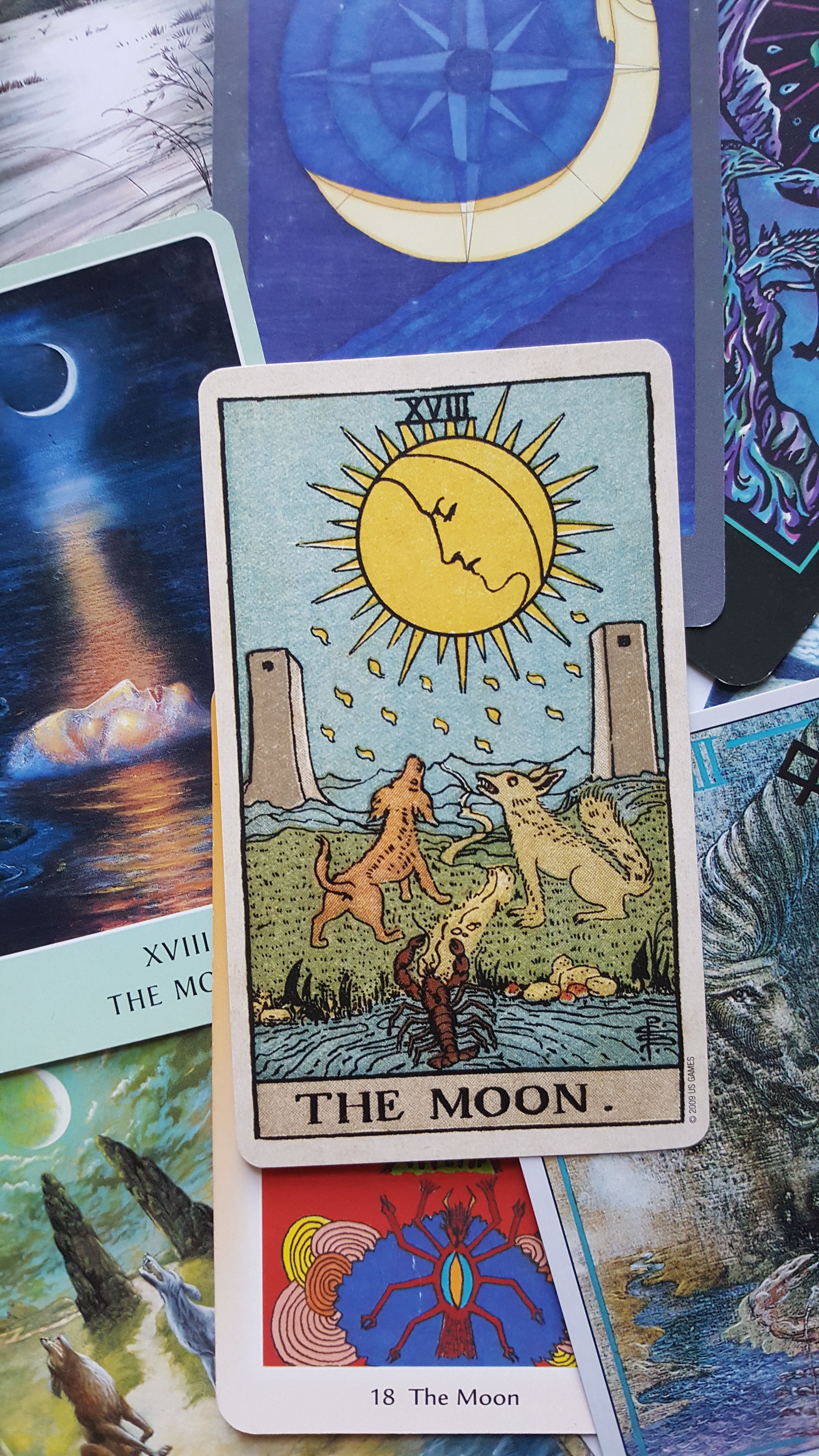 READING OF THE MOONTH

IMAGINATON: What wants to emerge from my imagination?

NEW DIRECTION: What new direction does my imagination invite me to explore?

EMBRACE: How to embrace and act on the imaginative flow of the moonth?

The arrival of the new moon stamps the moonth with an initiating energy that shifts and develops through a cycle of growth, fullness, and descent.  Each moonth I look to the Tarot’s astrological correspondences for the new moon to find 3 cards (a Major, a numbered Minor, and a court/people card) to guide musings on soul tending as well as creation of a moonthly reading. The reading can be done any time, but ideally between the new and full moons. Revisit the cards you pull periodically up until the next lunation to gain new insight as the light changes. This new moon arrives February 23rd at 10:32am ET. The full moon arrives overnight March 9th. Dark moon days are February 21 and 22.

In the iconic Rider Waite Smith Moon card, a lobster rises from the sea where it has been walking the ocean’s dark depths. Its claws reach toward a golden path leading to the mountains. To reach the end of the journey, the tiny creature will have to pass by obstacles – the howling dog and wolf – and through a strange landscape – rolling hills as blue as the sea support twin doorless towers. Above, the moon shines as brightly as the sun. These incongruous elements give the feeling of a dream. Meaning can’t be made with the rational mind about what is happening here. We are in the realm of the emotional, otherworldly, and unconscious. We’ll have to use our intuition as we travel the Moon’s path.

The Haindl Tarot’s Moon draws us even more deeply into the dream. There’s a lobster here, too, and a path out of the sea. The path is not golden but watery and flows toward a unicorn with an enormous horn.

While the unicorn may be based on an actual animal – the exctinct aurochs? – they exist today only because of imagination: our human ability to form images and concepts that are actually not present to the senses or exist in physical form. Our imaginations have imbuded the unicorn with many meanings over the centuries. Today pink sparkly unicorns delight children in cartoons and on sneakers, but in centuries past the unicorn was a symbol of sacrifice representing Christ giving his life to protect a maiden, the Virgin Mary, embroidered onto tapestries of the nobility. The unicorn as symbol holds both delight and sacrifice. Is found in commercial and creative spheres.

The Haindl’s unicorn appears to be birtthing itself out of ancient rock, an impossible feat. The powerful horn extends beyond the image’s edge, breaking through into the beyond. When we take this unicorn as our wisdom guide, we are invited to break through to the:

With breakthroughs of the imagination the way opens for the unreal to become real.

IMAGINATION: What wants to emerge from my imagination?

PASSAGE AND PRACTICE: Eight of Cups

When we embrace the images, messages, and possibilities flowing from our imagination, our perspective on the world changes. What we were satisfied with once may no longer be large enough now. We are called to move in a new direction. This is what happens when we walk the Moon path through the Eight of Cups.

In Gina Thies’ Tarot of the Moors’ Eight of Cups, a figure walks along the edge of a desert dune away from 8 small cups and toward a sky filled with a star constellation, the planet Saturn, and a full well of water. The contents of the eight cups may have once satisfied and in a desert environment the certainty of water is not left behind lightly. But the stars lure the figure toward the well, a source of new and deeper refreshment.

To shift course is not easy so we can work in an imaginative way to practice our way toward the leaving. At the 2019 Readers Studio, Gina and I used this Eight of Cups image to inspire a ritual practice for setting out on a new journey. Here are the steps for you to use or adapt:

NEW DIRECTION: What new direction does my imagination invite me to explore?

In the Herbcrafter Tarot, the Knight of Cups is the Adelita (Warrior) of Water who is refreshed by an encounter with Ocotillo. On a desert hike, she finds the plant in bloom with vibrant flowers rising from long, sturdy stalks studded with thorns. The Adelita risks the thorns to gather a few flowers to soak overnight, brewing a sweet juice of a delicate pink, the color of the heart.

For us to walk along our path like the Adelita of Water this moonth, the Herbcrafter guide book advises:

EMBRACE: How to embrace and act on the imaginative flow of the moonth?

The work of the imagination isn’t completed just at the time of the new moon. When the full moon comes on March 9th, we will open up to the Hermit’s practical mysticism to begin planning how to make the unreal real. Then the next lunation connects us to the active energy of the Emperor and the work in outer world will advance. Join my list to get these lunar updates in your inbox.