The height of this moonth’s cycle comes with the full moon arriving overnight July 4th – 5th (exact at 12:44am ET on the 5th), and offers a revelation about how the lunar energies initiated on June 21st new moon are developing. Guided by its associations with The Chariot, Two of Cups/Water, and Queen of Cups, the new moon invited us to refuse fear and embrace what helps us work together. Out of the full moon revelation about this developing energy, we are issued an invitation to return a gift to the world in the final weeks of the lunar cycle.

On this full moon the Devil comes calling.

Associated with the full moon’s astrological alignment with Capricorn, the Devil appears ready to expose what we’d rather keep hidden, baiting us to respond with fear.

The Devil is one of the trio of cards that people fear the most in the Tarot. (Death and The Tower are, no surprise, this figure’s fearsome companions.) This fear is triggered by The Devil’s portrayal in the Christian tradition as an all powerful figure of evil who stands in opposition to God’s light and goodness.

But The Devil’s qualities are not consistent across cultures. There is no parallel figure in the Celtic tradition, for example, Though the horned god Cernunnos may have inspired some of the Devil’s iconography, his significance as a god of fertility, life, animals, wealth, and the underworld is vastly different from the Christian Devil. Neither is there a Devil figure in most traditional African religions rather, as Courtney Alexander writes in the DustIIOnyx guide book, “humans and deities alike choose whether to navigate the world from a negative or positive disposition.”

The Jewish tradition offers yet another face of the Devil we can see in this depiction from the Raziel Tarot created by Rachel Pollack and Robert Place. 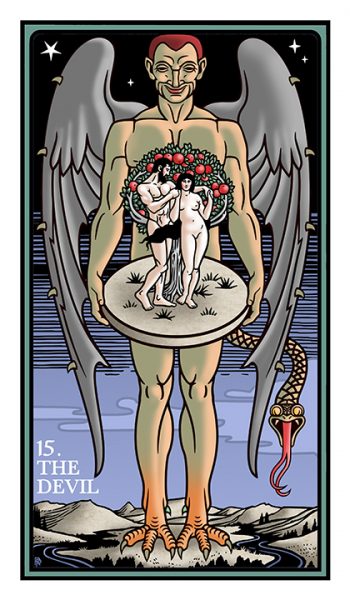 About this Devil, Rachel Pollack writes:

Quite simply, the idea of an all-powerful Devil, who was the highest and most beautiful of angels, who led a war in Heaven against God and was cast into the dark and fiery pits of Hell does not exist in Judaism … And while Jewish superstition, especially in the Medieval period and after, became more fixated on demons these all involved individual dangers. No great Devil holds the soul of all humanity in its grip.

So this chicken-footed figure with a pleasant face and orangish hair is just a trickster who seeks to keep us in his grasp. In the image, the Devil has trapped Adam and Eve who stand before the Tree of Knowledge, symbol of their disobedience to God, into believing that a world of constriction and punishment are all that exist.

But this Devil’s reach is also limited. He controls only the small space he can hold. The rivers and mountains beyond do not belong to him. This greater world waits for Adam and Eve to open their eyes and see the truth of the world’s vastness.

This limited Devil is the guardian at the gates of revelation for this full moon. This figure will block your way and test your vision, but the beyond beckons. Don’t let the Devil’s limits constrict you. Don’t believe that the world the Devil is trying to sell you is all that exists. This full moon is also an eclipse, which sacred arts teacher Briana Saussy says is good for breaking patterns. What pattern has kept you living in fear, hiding from the truth, cut off the fullness of life? This is the time to break that personal pattern.

As this Devil appears on the birthday weekend of the United States, the country has the opportunity to break collective, historical patterns. The US’s Trickster in Chief is not subtle as he directs our attention to the patterns that need to be broken. He defends Confererate statues and tweets supporters shouting white power. These are the symbols on top of a history of slavery, racism, and anti-blackness existing since the founding and activated in a new way today.  He celebrates the 4th in the Black Hills of South Dakota on land that the US Supreme Court ruled was illegally taken from the Lakota, reminding us of the land theft and genocide of native peoples. He has us thinking about the twin sins present at our nation’s founding.

The sins have spread their tentacles into every aspect of our society. It would seem impossible to dismantle them. But remember the Devil has limits. It’s only an illusion that we can’t move beyond his small thinking. We already are.

Think that reparations to the descendants of enslaved people is unprecedented? We’ve already made reparations to Japanese Americans interned during World War II. And each year we offer financial support to Holocaust surivors living in the US.  The CARES Act to address the pandemic cost $2 trillion and there is more relief being planned. Why couldn’t some of these funds be redirected to close the racial-wealth gap – be in the form of reparations?

When the 21 numbered cards of the Major Arcana are lined up in 3 rows for what is called the Fool’s Journey, the Devil starts the third row of work toward fully living out our soul’s purpose. We must go through the Devil to continue to grow. This full moon challenges us to take up that task individually and collectively. Then we will be able to break free.

To encourage break through under the full moon of July 4th – 5th, you might do one or combine all of these practices:

When you are done, remember to offer gratitude for what you have received. Consider what gift you now want to return to the world. Pulling a card for guidance on the gift is always a fine thing to do. In the coming weeks and before the moon returns to dark around July 17th offer your gift to the world.