by Yesbelt Fernandez of Yes Spiral 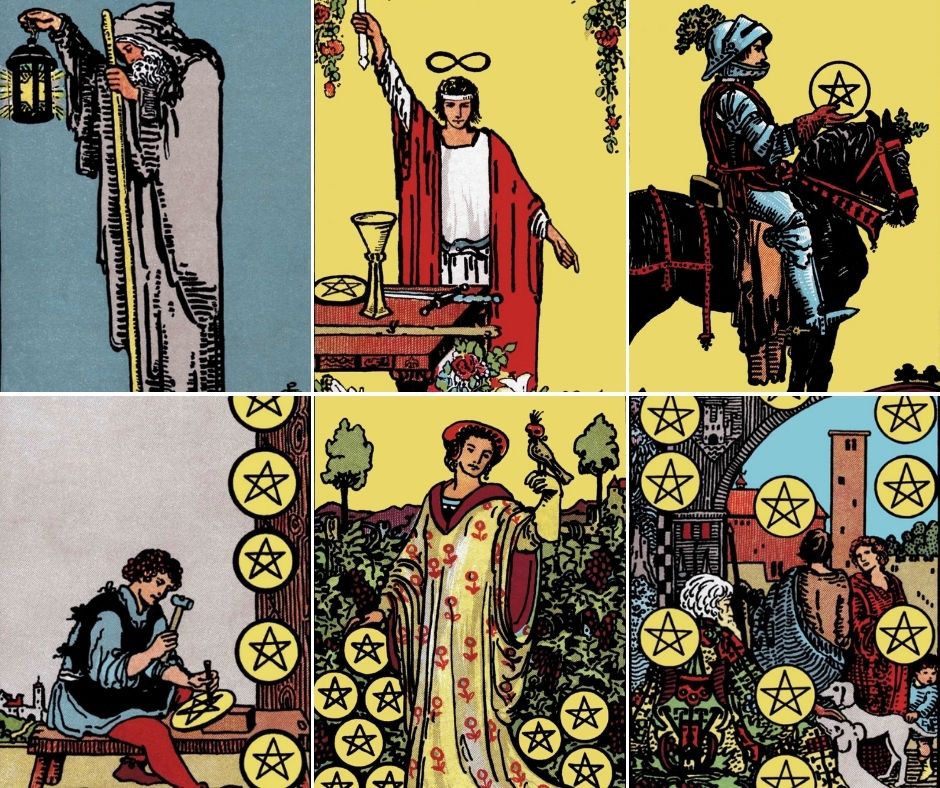 New moons are a powerful time for setting intentions, making wishes, and breaking or making habits. It is also a good time to look inward to explore what is sitting in the shadows asking to come to light. The next new moon will be in Virgo on Thursday, September 17th at 7am Eastern time.

Five years ago, during a Virgo new moon I started on my journey of tapping into the energy of the moon by setting intentions and using tarot as a framework to keep me on track to manifestation.  Over the years my practice has evolved but following the cycles and phases of the moon has remained a constant companion. I pick five cards, one for the new moon, waxing moon, full moon, waning moon and the fifth card carries into the following moonth keeping me spiraling in concentric monthly circles. More on the spread later for now, let’s take a closer look at what Virgo energy is all about.

Virgo is an earth sign and in tarot earth signs are represented by the suit of Pentacles. The energy is grounding, stabilizing, and manifesting. It symbolizes values, practicality, prosperity, tradition, security, work and health. Virgo energy inspires a need to analyze, discriminate, and function efficiently.

When the Sun or the Moon are in Virgo here are some things to do: Analyze, edit, critique, organize, while having faith in the perfection of the whole.  Assess the details, sort what to keep and what to release. Deal with paperwork, mechanics, delicate crafts, or anything where precision is needed. Work out and eat well. 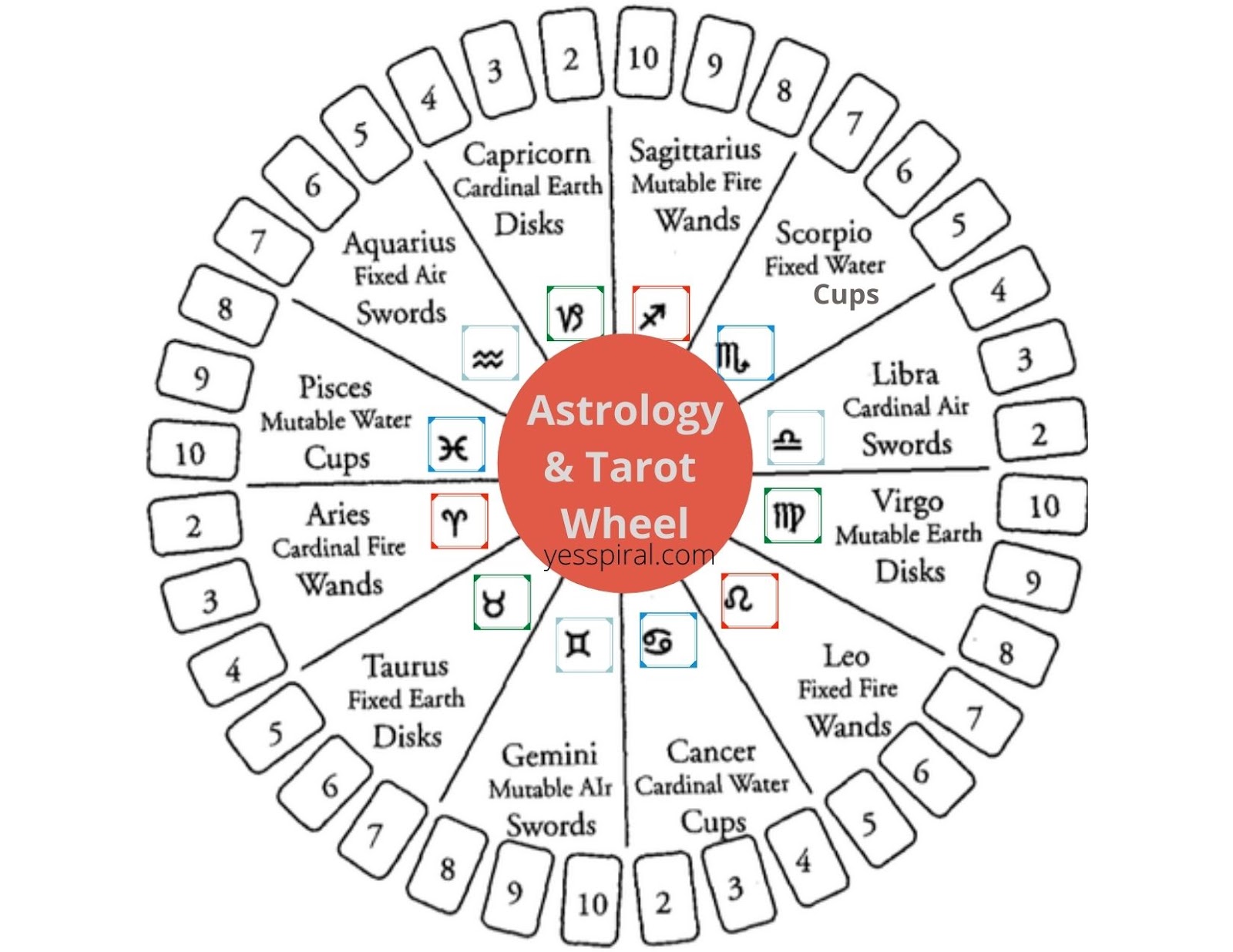 All 78 tarot cards have a place on the astrological wheel. All of the signs have two Major Arcana cards, one Court card and three minor arcana cards. The cards associated with Virgo are:

The Hermit is ruled by Virgo:

The Hermit is self-disciplined, reliable, and a troubleshooter. They represent wisdom, introspection, meditation, and leadership by example. Their rationality and practicality tend to keep them isolated. They have a desire to teach and help people.

The Magician is ruled by Mercury which rules over Virgo (and Gemini).

The Magician is a master of space, time, and cosmic energy. They serve as a channel for transformation and change and act as a link between ideas and physical existence. Mercury also rules over messages and communications.

Knight of Pentacles is the physical embodiment of Virgo and Mercury. They are patient and calm, discerning and analytical and move at a slow and steady pace. They are energized when in service to others and are happy to take care of the ordinary and mundane details of everyday responsibilities which others often overlook.

Eight of Pentacles is ruled by the Sun in Virgo. They are known as Lord of Prudence.  The Sun brightens everything it shines upon, providing a boost of energy and optimism to work. Like the Hermit, Virgo is diligent and devoted to his craft until reaching success and achievement.

Nine of Pentacles is ruled by Venus in Virgo. They are known as Lord of Material Gain.  Venus planet of pleasure and contentment is at her fall in Virgo, but they manage to transform the space to fit their needs of comfort and beauty. Venus in Virgo brings gifts of prosperity and possessions.

Ten of Pentacles is ruled by Mercury in Virgo. Is known as the Lord of Wealth. Mercury is exalted in Virgo and brings the Hermit messages from the outside world. The wealth he brings are happy familial relationships, health, boundaries, and money for needs and wants for a life well lived.

Now that you are more familiar with Virgo it is a good time to set intentions and pull cards to cycle through the moonth. The New Moon in Virgo energy will be most potent Thursday September 17th through Saturday September 19th 2020. 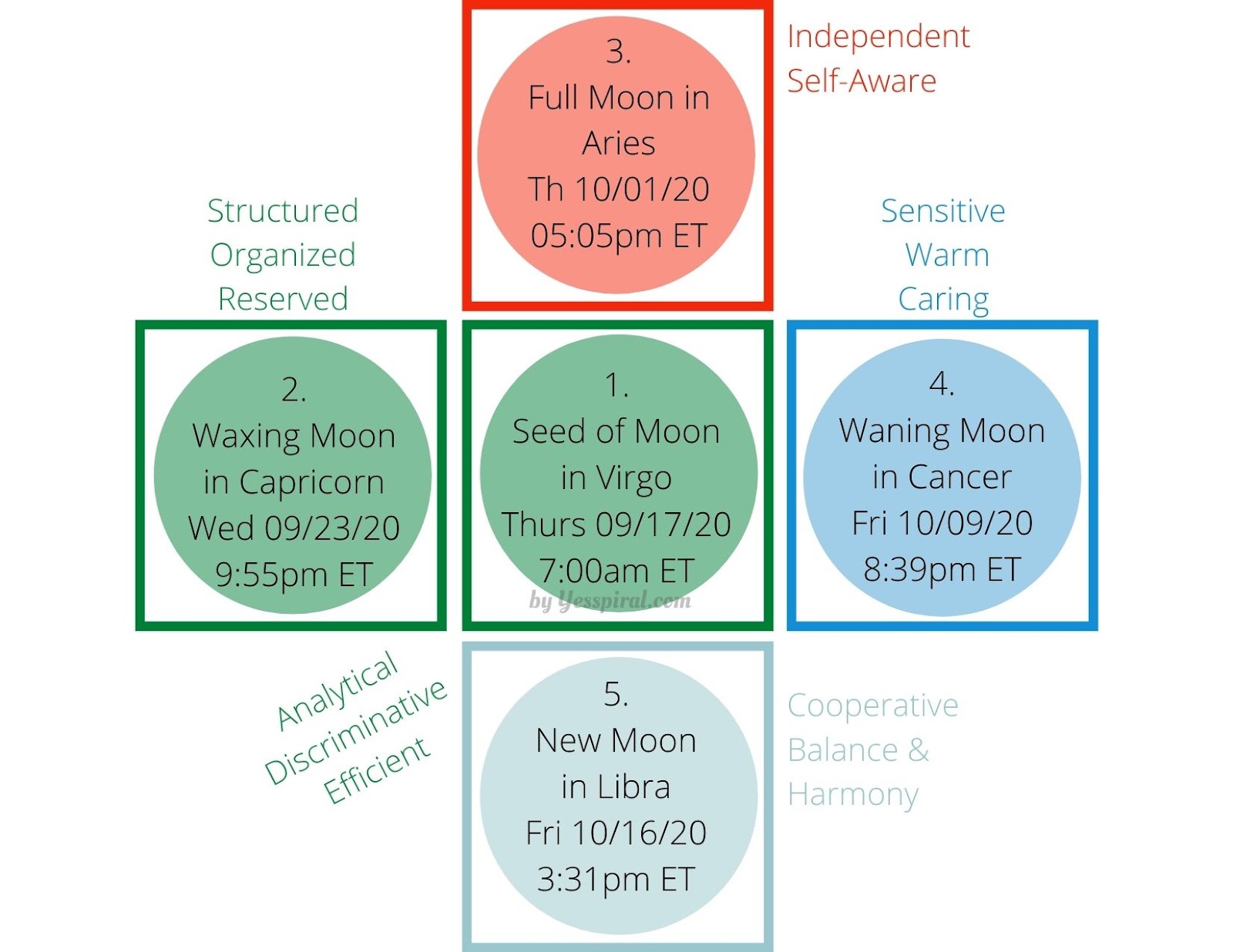 1.  What is the seed (foundation) of the Moonth in Virgo?

2. What begins to grow as the Moon waxes in Capricorn?

3. What peaks as the moon becomes full in Aries?

4. What to let go of and release as the moon wanes in Cancer?

5. What is the seed (foundation) of the next moonth in Libra?

Along with my card work, I work with herbs to really bring my experience of these themes into the body. This month I’m taking the Knight of Pentacles as my herbal guide because he is earthly like Virgo and fiery like the Magician. This Knight inspires me to work with Peppermint and Horehound. The two combined make a lovely tea to support a healthy respiratory and digestive systems. Systems that we want to keep happy during these pandemic times.

Peppermint is associated with the element of fire and is traditionally used to aid digestion and cool down fevers. Magically, peppermint is used for purification and to raise the vibration of an area.

Horehound is associated with the element of earth and traditionally used to make cough drops. Magically, horehound is used for protection, to clear the mind, and promote quick thinking.

You might want to brew some of this tea to drink while you are laying out your cards.

Astrology for Yourself: How to Understand and Interpret Your Own Birth Chart

Tarot and Astrology: Enhance Your Readings with the Wisdom of the Zodiac

Be your own Moon Astrologer. Transform your life using the Moon’s signs and cycles

New Moon Astrology. The Secret of Astrological Timing to Make All Your Dreams Come True