The arrival of the new moon stamps the moonth with an initiating energy that shifts and develops through a cycle of growth, fullness, and descent.  Each moonth I look to the Tarot’s astrological correspondences for the new moon to find 3 cards (a Major, a numbered Minor, and a court/people card) to guide musings on soul tending, selection of prompts for personal/spiritual practice, and creation of a moonthly reading. The reading can be done any time, but ideally between the new and full moons. Revisit the cards you pull periodically up until the next lunation to gain new insight as the light changes. This new moon arrives on Friday, October 16th, at 3:31pm ET. The full moon arrives on Saturday, October 31st to bring a revelation about how the energies are developing.

The Soul Shaping Path of Justice

The new moon arrives in the astrological sign of Libra which is associated with the Tarot’s Justice card This lunar cycle we are invited to walk the soul shaping path of justice, truth, fairness, and balance. 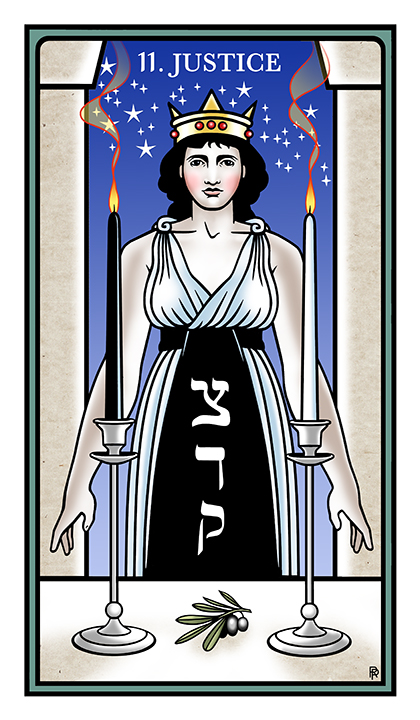 In Rachel Pollack and Robert Place’s Raziel Tarot, the Divine Feminine, the Shekinah, lights candles just as Jewish women do each Friday night to begin the Sabbath. Through this simple practice performed at the kitchen table, the world is renewed. In using this image for Justice, the Raziel Tarot teaches us that justice, too, can be renewed.

Rachel writes: “Our lives, our very existence, are an ongoing gift, one that is renewed at every moment, with every breath and this depends mystically, emotionally, even physically on our commitment to Justice.”

Commitment to Justice is shown by acting in these diverse ways. Mystically, rituals such as the candle lighting to enact the remaking of the world is an act of justice, Emotionally, opening your heart to the pain of injustice experienced by others and yourself is an act of justice. Physically, showing up in public (in the voting booth, at a rally, or through conversation with a neighbor) to say no to injustice and yes to visions of a fair future is an act of justice

Rachel opens her meditations on Justice with a line from Deuteronomy: “Justice, justice shall you pursue,” and notes that words are rarely repeated in the Torah. The repetition of Justice could be for emphasis or, as Rachel posits, could be a call for Justice in both the spiritual and earthly world. In these times, I hear this repetition as a call for we humans to recognize our role in renewing justice in actions large and small day after day, week after week, year after year.

Passage and Practice: The Four of Swords

This moon passes through the last third of Libra, which could be said to be its most developed aspect and associated with the Tarot’s Four of Swords. 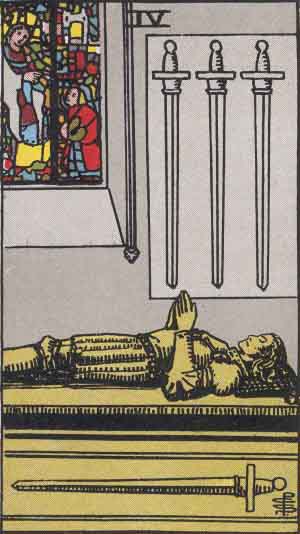 In the iconic Rider Waite Smith image, this passage, at first glance, seems to indicate a time of inaction. But there is something mysterious about the central figure in the image. Is the Knight shown, a person sleeping or are we seeing a sarcophagus representing the dead buried within?

Whether living or dead, the hands are actively held up in prayer position rather than resting on the figure’s chest. Reexamining this image, we find dynamic rather than passive action.

As a living being, the Four of Swords Knight is engaged in meditation or prayer to clear and concentrate the mind, and invites us to do the same. The Knight has stepped out of the everyday world for these meditations, seeking out a sacred place to support a connection to the highest/deepest values the Knight desires to uphold such as Justice. Centered again, the Knight can resist the spell that the noisy, political world would cast, disrupting their focus on serving Justice. As one dedicated to a quest and cause, this meditative pause represents a temporary time of renewal to gather energy for the work ahead.

Meditation practices scheduled into your day (even 5 minutes helps) or week (can you find a block of time to step out of the busyness of life?) are especially beneficial for moving through this moonth’s passage. This could be as simple as closing your eyes, focus on your breath, and reminding yourself of the values you seek to uphold. When you open your eyes, you will be more centered in what is most important.

It is also possible that this Knight is an effigy of an ancient ancestor. Perhaps the ancestor prays for us, the living. This moon cycle that goes up to November 14th brings us through cross cultural days of ancestor connection. The full moon comes on Samhain, the Celtic New Year, October 31st, when the veil between the worlds is said to be thinnest. Then November’s first days bring Mexican Day of the Dead traditions, Catholic masses for All Saints and Soul Days, and secular commemorations on Veterans Day.

In this time of lengthening nights, we reach out to our beloved dead and ancestors with love. We may put a lot of effort into our reaching rituals, in our sending of love. But the Four of Swords as a passage of Justice reminds us to balance our reaching with receiving. Our ancestors can be active in their support of us. They may be sending just what we need to know to move in a positive direction out of these testing times in which we find ourselves. Perhaps they are praying for us and we need to open our hearts to receive this loving support.

Posture: King of Cups (known as the Mystic of Vials in the Numinous Tarot)

The King of Cups shows us how to move through this passage on the path of Justice. These masters of the element of water have come into a strong relationship with their emotions. Not suppressing them but letting them flow and riding the emotional ebb and flow, storm and quiet. This emotional balance supports the King’s ability to imagine and believe in possibilities beyond rational proof, what has not yet come into existence, or what lies waiting in the past to be reclaimed. This King holds on to and shares out this vision of a just and generative world. Even when the world’s realities seem to tip far away from the vision, this King persists in working for the good of the whole in creative and loving ways. 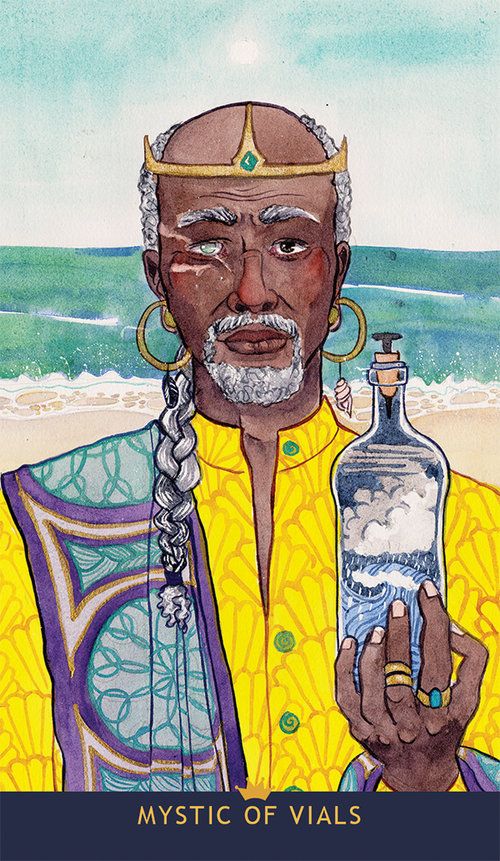 The work of Justice isn’t completed just at the time of the new moon. When the full moon comes on October 31st, in the sign associated with The Hierophant, 5 of Earth, and King of Pentacles we can open to healing possibilities.

In an unusual astro-Tarot alignment the Major Arcana cards associated with the new and full moon are both ruled by the planet Venus associated with the Empress. Love, abundance, and beauty, thus, are the currents running under each day of this moonth even as the everyday world may be consumed with chaos and conflict. Commune with the Empress to tend your soul and then bring what you receive into your life and let it spill into the troubled world.

REFLECTION QUESTIONS / READING FOR THE MOONTH

These questions are offered for reflection and to spark practice throughout the moonth. Pulling Tarot and oracle cards in connection to these questions is appropriate, but not absolutely necessary. You might carry a question with you on a walk for example and observe what is happening in the natural world as a way to find insight into the answer to the question.

JUSTICE: What contribution can I make to the renewal of Justice during this moonth?

SPELL BREAKING: What spell do I need to break to make my contribution?

POSSIBILITY: What possibility—perhaps only imagined before—can I make real as I break the spell on the path of Justice?