They emerge, they emerge,
the dark hidden healers,
power from secrets,
visions from stones. 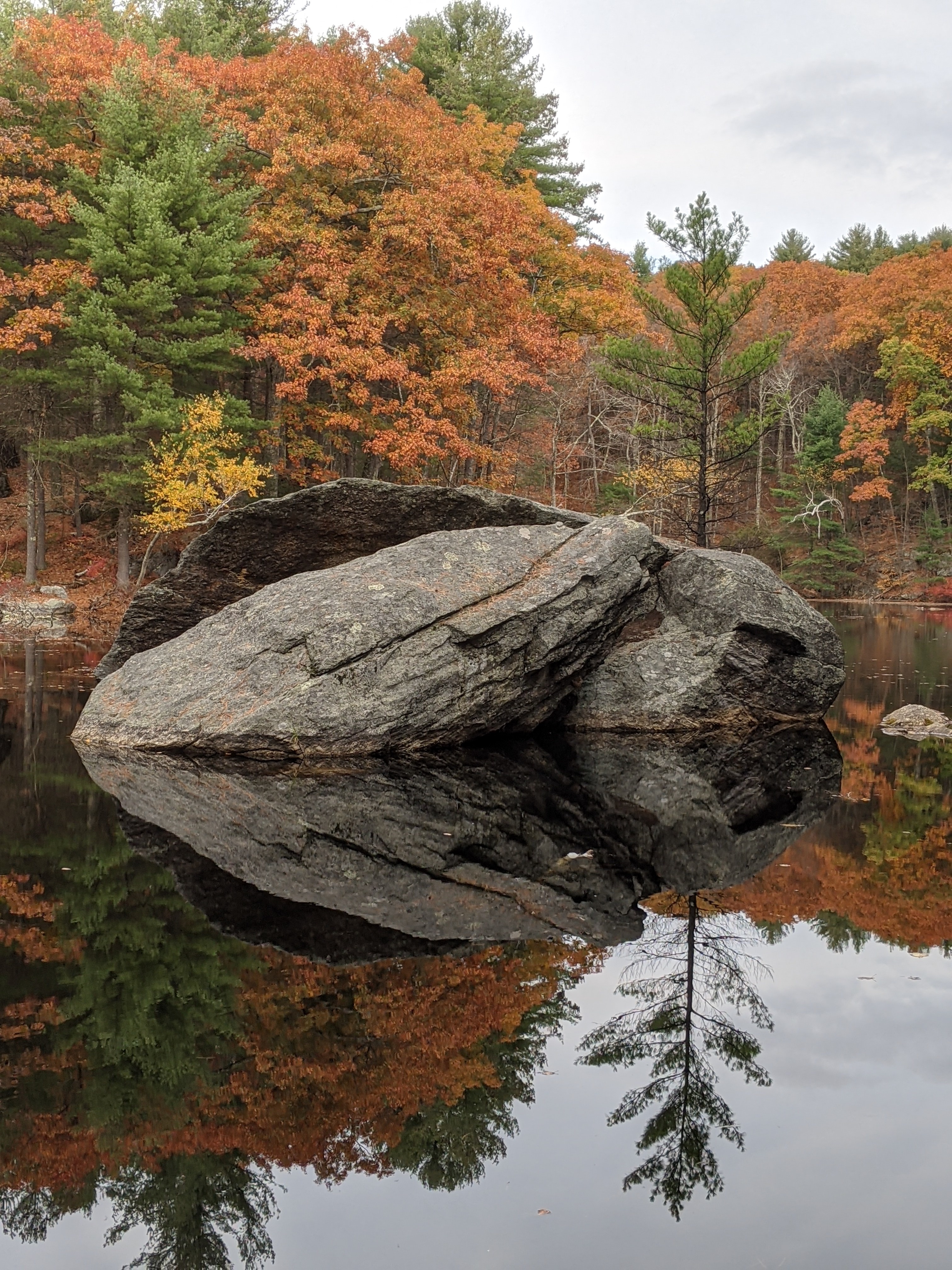 The full moon arrives on October 31st sending its light to flow over days of ancestral remembrance—Samhain celebrations to mark when the veil between the worlds is thinnest, Mexican Día de los Muertos traditions, and Catholic masses for All Saints and Soul Days—as well as the U.S. election.

This moon comes in the place of the astrological Wheel of the Year associated with the Five of Pentacles. In the iconic Rider Waite Smith image, two figures in tattered clothes, one using crutches trudge through the snow outside an opulent church. Societal institutions have failed them, offer no relief, This is one of the bleakest cards in the Tarot pack. It is also a mirror to our present moment of a pandemic exacerbating the cruelty of systems set up to privilege profits over people. 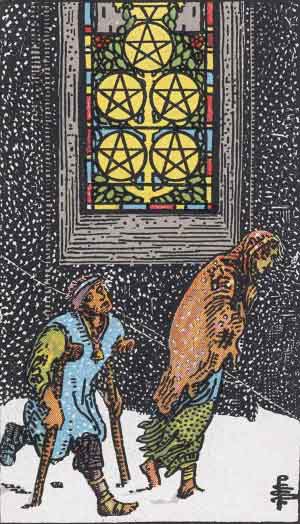 Oddly, it is reassuring to see this card appearing. There is truth here that is missing from the messages those who want to stay in power are sending. I feel a little less crazy! At least the Tarot isn’t lying to me.

And along with not lying, there is always a different version of a difficult Tarot card that presents the antidote to difficulty seen in the Rider Waite Smith. That Five of Pentacles antidote card is the Shining Tribe’s Five of Stones created by Rachel Pollack. 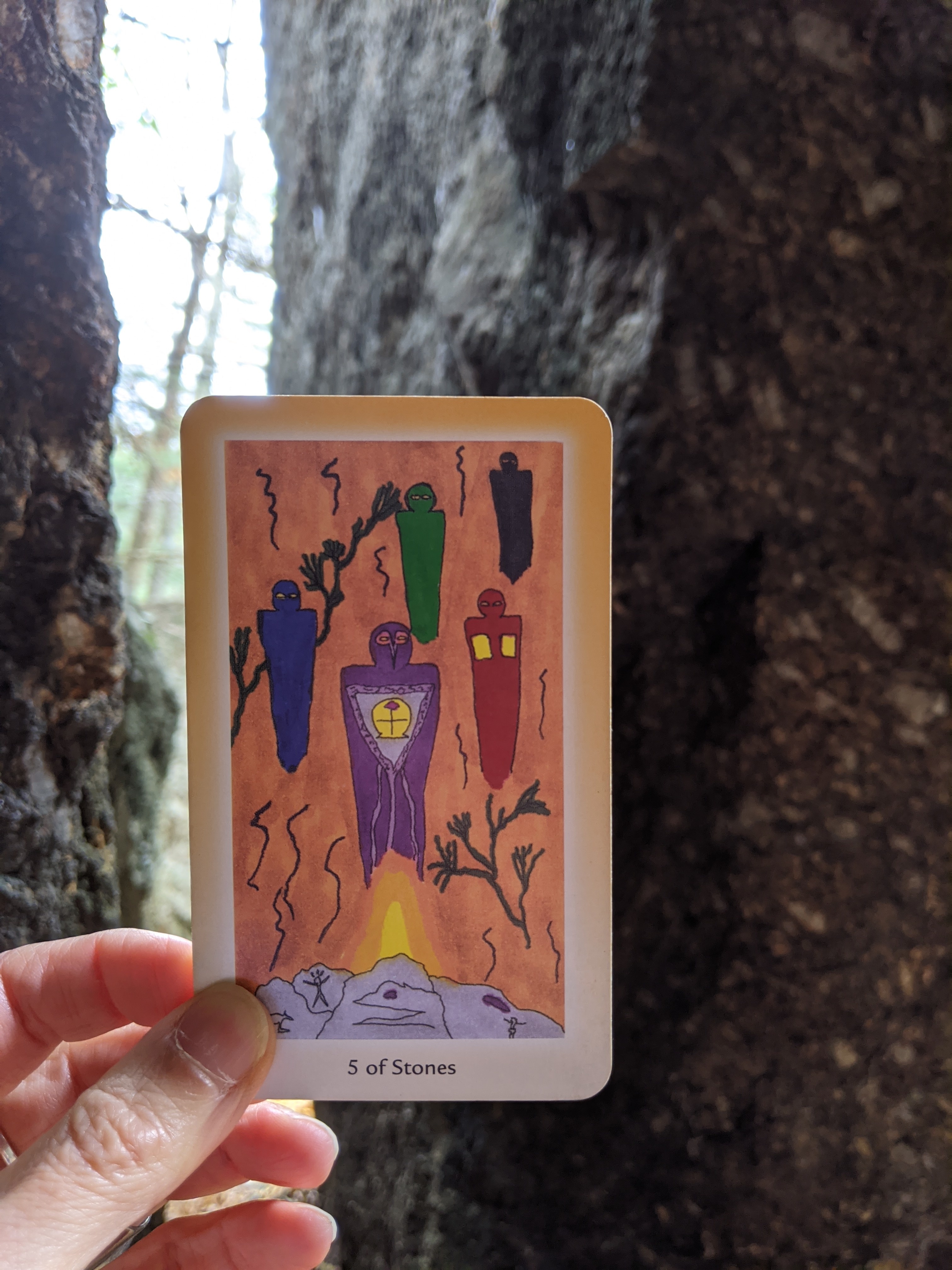 The image shows five spirits in a cave that can be called upon for healing, for guidance for protection. The triangle at heart level of the central figure is a symbol of Venus, letting us know these spirits come to offer loving support. We are not alone in our difficulty. Helpers from the other realms—the ancestors, the Divine, nature spirits, depending on your beliefs—gather around us especially at this time of year. We are invited to open our hearts to receive their love and let it flow through our hands into the world.

Inspired by the Five of Stones and other correspondences of the moonth, Yesbelt Fernandez of Yes Spiral and I prepared a special video filled with musings, prompts, and practices for marking this full moon and drawing upon its healing potential. Parts of the video and their starts times are:

We start with some lines from poet Frederico Garcia Lorca (in English and Spanish!)

At 10:15 mins – Yesbelt leads us through creating a Rose Elixir—inspired by The Herbcrafter Tarot’s association of The Empress to Rose— as well as suggestions for heart opening and stress reducing teas.

At 22:30 mins – Intro to Full Moon card correspondences and energies with the Shining Tribe Tarot as our guide.

At 29:00 minutes – Meditation to encounter healing spirits like those in the Shining Tribe’s Five of Stones begins (last about 20 minutes).

A closing thought on the Five of Pentacles. Even within the bleakness of this card there is potential. The two figures stand together. As we move from the days of ancestor reverence into the US election, we need to stand together and stand up for what we believe in. I’m sure you have already heard how important it is to vote. This year we may also need to defend the vote from a power grab. It seems hard to believe, but better to be prepared than shocked and uncertain what to do. You can find out more at Choose Democracy. Trainings are being led by a wise elder, a long time social change strategist and non-violence activist who I had the privilege to work in the early 2000s.

Pentacles and stones are accepting. There are no doors in the granite landscape. All are welcome. When these wild times try our souls and drain our energy, we can go and stand with stones or hold even a pebble in our hand to be reminded of time’s long sweep and that which is Greater Than ourselves. Then supported by stone, we can keep going where we need to go.