Death comes in the middle.

As we travel year after year with the moon’s cyclical shifting through the consistent solar round, we learn the same lessons in new ways. We are tempered by time and our wisdom deepened.

And so now, as we do each year, we encounter Death—through this Tarot card’s correspondence to the astrological sign of Scorpio—to be changed and shaped again by the symbols, wisdom figures, and layered meanings offered by this image. This soul shaping path of Death opens up this year for us starting with the new moon coming overnight November 14th into the 15th (exact at 12:07am ET on Sunday, the 15th).

Death comes again. Yes, death comes in the middle of our lives.

This has long been a description of Death I’ve offered to people confronting one of the Tarot’s most notorious cards. When I’d teach a class or welcomed visitors during open houses at my studio, I’d point out the 21 super-sized Major Arcana cards displayed on the wall, and, yes, at card number 13 Death pretty much was in the middle. Of course, I’d follow up with the usual caveat that the Death card’s meaning isn’t really about physical death, but more about transformations that renew our lives and society. 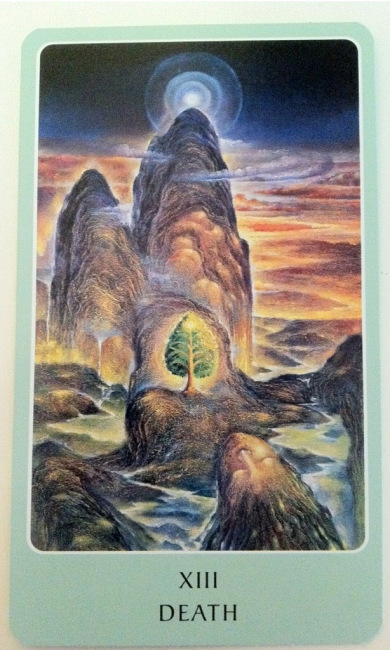 From Tarot Roots of Asia

But in November 2012 Death broke into my life. My partner John died in a car crash and I encountered Nothing. He was utterly gone. Death in my life had brought me to the End. Hard stop.

Death shattered my beliefs. I hadn’t thought that we retained our earthly personalities after death, but I thought there would be Something. Instead Nothing closed around me.

And then I had a dream.

I dream a field of wild grass blowing, dry, but with the slow whoosh of blades bowing.

A cottontail crosses my path.

I follow the rabbit to a room without walls. Rise up into this place with a table, old wood polished. I leave something on the table as I pass through the room. I hear it land with a clank.

And beyond, finally, John is sitting there wearing an electric blue T-shirt, the usual cap.

He is holding a box. He is reading a food label. He is saying: “There can’t possibly be any tomato in this thing – and it’s not organic.”

And I am moving toward him as he is reading and talking. I am reaching like you would reach for a cat you don’t want to escape under the couch. I am grasping his arms and looking into his eyes, saying: “I love you. I love you forever.”

He looks a little surprised. He had, after all, only been talking about a tomato.

I woke with a wet face, but these tears were refreshing. So absolutely himself from his cap to his tomato reprimand, John was there. He wasn’t alive in body, but I had encountered him in a distinct way. A feeling of connection was as bright within me as his blue shirt. Nothing became Something.

The Something come from the Dream was Love. Death didn’t end Love. Love returned Death to the middle of my life. I began moving again, feeling my way toward tending this loving flow between John and me. (More of this story and practice prompts for doing the same with your beloved dead are in Speak Soul to Soul available on the website.)

I am telling you this personal story because it aligns with this new moon’s invitation to the collective, to all of us. This moonth’s path of Death passes through the place on the Wheel of the Year associated with the 7 of Cups. This is the card of dreams and fantasies, those strange visions that arise from the depths of our desires and bring us to new places. 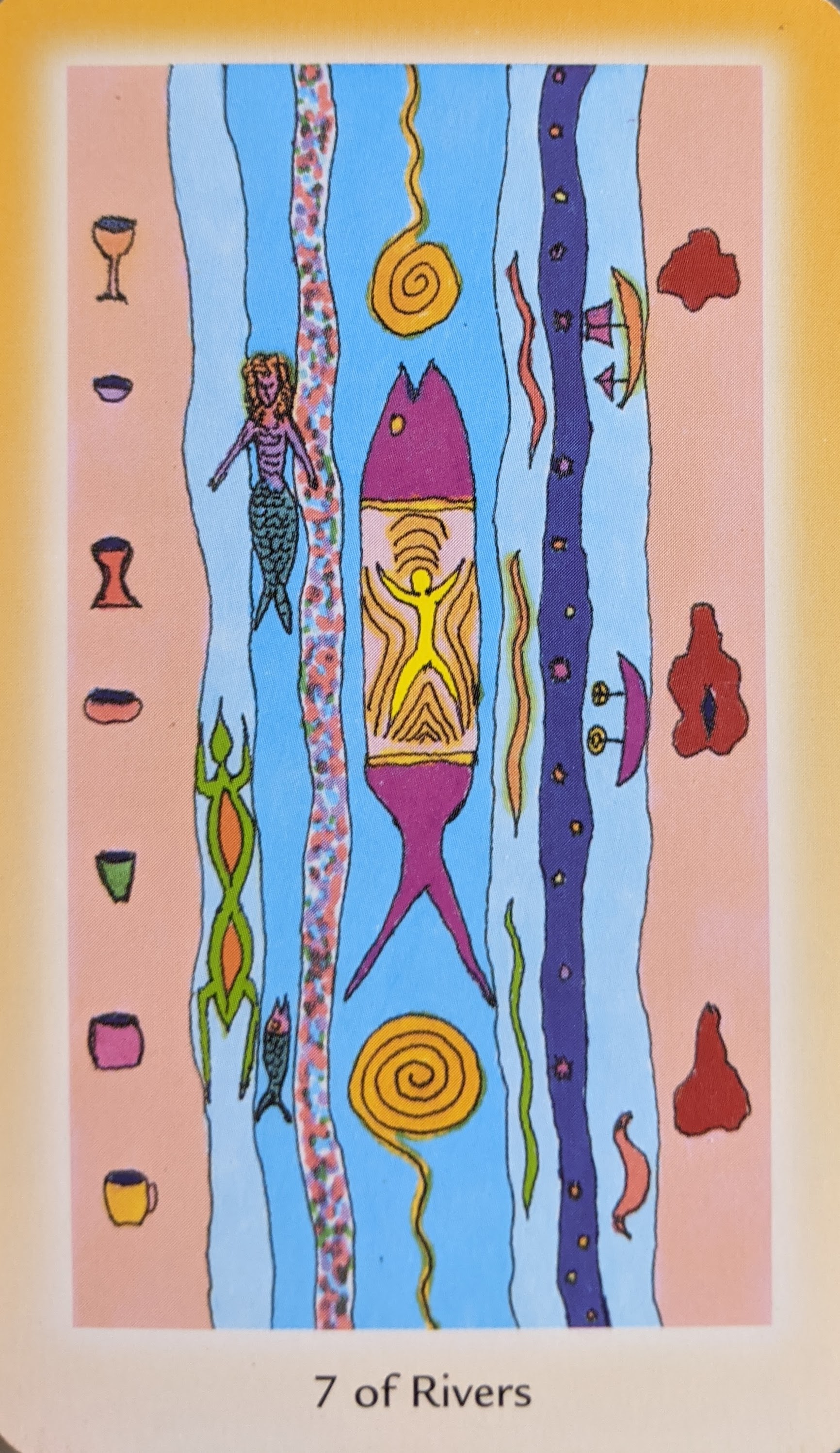 The Shining Tribe Tarot‘s version of the 7 of Cups

Dreams and fantasies are derided by mainstream society’s rational culture and norms. The powers that be frown upon daydreaming and reading fantasy novels. They’d rather we were productive. Why? Maybe deep in their subconscious they know that dreams and fantasies are truly powerful. They break the spell of control they’d like to exert over us. When we dream beyond the way things are, we lay the foundation for the transformation of current reality.

A recent national death experience—the 2016 election—seemed to some to send the US into a formerly unimaginable End. Many in shock just wanted to return to what had been before, but when Death comes, going back is not in our power. So, others began to dream of Something else.

They gave voice to their Somethings with words whose power grew the more they were echoed: Black lives matter—all black lives. You are not alone, #metoo. United we dream. Joy to the polls!

And these Somethings have moved us through this US national death experience and into a new presidential team. I’ve talked with people of various backgrounds post-election about how they feel a tension they weren’t even tracking being released from their body. I watched the commentator Van Jones weep on TV saying, “And this is a big deal for us just to be able get some peace and have a chance for a reset.”

The cards of this moonth invite us to keep dreaming. Despite real and immediate challenges ahead—Death remains active in our lives—the 7 of Cups reminds us of the power of dreaming to keep Death from becoming an ending.

Of course, dreaming alone does not complete the transformation. We must act. The model for our action this moonth is the Knight of Cups. The Tarot’s Knights are dedicated to their causes. They move at different speeds, motivated by different elemental forces, but they are united in constant movement toward what serves the good of the Whole. 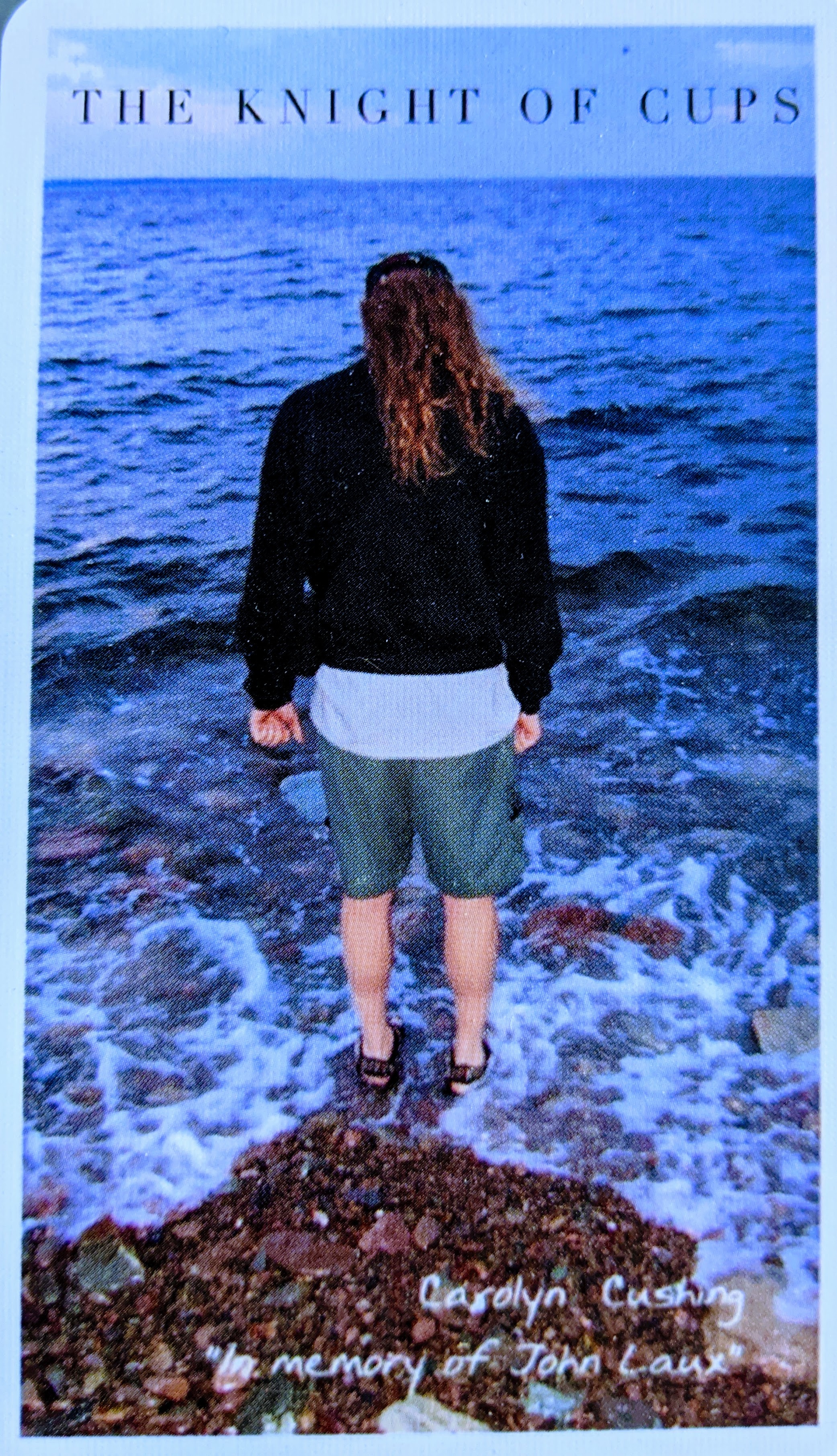 Yup, it’s John as the Knight of Cups from the Mass Tarot Deck

Knights of Cups, when they are in their most powerful flow, are in touch with their emotions, own even their wildest desires, and dare to imagine beyond the boundaries of what currently exists. They are open to allies in all the realms. They stand shoulder to shoulder with the living, and imagine their beloved dead at their side, their ancestors at their backs.

Knights of Cups move into dreams with their whole broken-open hearts and unite their hands with others to make the dream real.

The reflection questions / reading of the moonth is offered to support dreaming through Death are:

DEATH: What ending is opening up in the middle of my life?

DREAM: What dream can come through the opening made by Death?

MAKING THE DREAM REAL: How can I best step into making the dream real during this moonth?

If you’d like to more on-going support for your dreaming through these long nights that come before the Solstice, you are invited to join us for the e-retreat Descent and Return of the Light.

This will be the 6th year that I have offered Descent and Return of the Light. Each year the themes stay the same, but I weave in reflections and practices to meet the needs of the current year. This year we will include lament with our gratitude practice and dive deep to release all that we don’t want to carry from the sometimes crushing weight of 2020 into the new year. We will seek the regeneration that comes from working with rather than pushing away the darkness that comes at Winter Solsticetide.

Thank you Carolyn. I stumbled upon this after surfacing from a three day silence retreat and is what I needed to hear in so many ways. Much gratitude. K.

I am so glad, Karen, that this helped with your return from retreat.