This new moon (arriving on Friday, the 9th, exact at 9:17pm ET) puts us on The Chariot path of movement through the passage of abundance offered to us by the Three of Cups.

It is easy to make the connection to abundance looking at the images offered by artists for the Three of Cups. In the iconic Rider Waite Smith deck, Pamela Coleman Smith shows three women with cups seemingly of celebration lifted as they dance in a field filled with flowers, fruits, and vegetables. 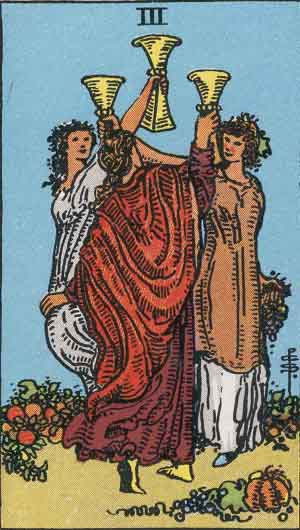 Tarot author and artisan T.Susan Chang in her wonderful 36 Secrets: A Decanic Journey Through the Minor Arcana of the Tarot muses on this image and makes an interesting connection between abundance and scarcity. Writing about a “scarcity mindset,” Chang recounts her understanding of this term she first encountered in the 1990s:

[It] had to do with thinking life is a zero-sum game, a competition of scarce resources. You can’t afford to be generous when the stakes are your own survival! The attitude needless to say is a recipe for human misery. But what is the antidote. Perhaps it is the “abundance mindset”—the sense that there is more than enough for everyone.

And the Three of Cups—titled the Lord of Abundance by the esotericists—is the perfect illustration of that mindset.

As I’ve been working with 36 Secrets and pondering the Three of Cups, I have also been reading policy expert Heather McGhee’s The Sum of Us: What Racism Costs Everyone and How We Can Prosper Together. With data and compelling stories, the book demonstrates how policies of the long past, very recent past, and still present harm not just people of color but also white people in economic, social/psychological, health, and moral arenas.

An actual event—that is a Three of Cups reversed story—becomes an organizing metaphor for the book: the draining and destruction of the Oak Park Pool in Montgomery, Alabama in 1959. McGhee describes:

The [city] council decided to drain the pool rather than share it with their Black neighbors. Of course, the decision meant that white families lost a public resource as well. … Uncomprehending white children cried as city contractors poured cement into the pool, paved it over, seeded it with grass that was green by the time summer came along again. To defy desegregation, Montgomery would go on to close every single public park and padlock the doors of the community center. … The entire public park system would stay closed for over a decade. Even after they reopened, they never rebuilt the pool.

As evocative as a Tarot image, this story vividly illustrates racism’s blanketing harm. McGhee then offers examples of more complex realities to show how the pool of public resources is constantly being drained to the detriment of all and how racism is at the root of decisions and policies. In the chapter Ignoring the Canary, for example, she walks us through how deregulation and lack of oversight sparked subprime predatory lending to homeowners in communities of color, and—after alerts to the problem with these loans were ignored— led to the 2008 financial crisis that spread the fire of misery to white homeowners as well. Many people of all races lost their homes and have not been able to buy again.

McGhee takes us through cases drawn from public education, housing, health care, voting rights, and environmental policy to show how racism degrades quality of life for all. But McGhee does not just leave us “high and dry” in that drained pool. She invites everyone to be part of creating what she calls the Solidarity Dividend through participating in campaigns like the Fight for $15 (as a minimum wage for all workers), union drives, working for voting rights, or welcoming immigrants to communities needing revitalization.

In a now upright Three of Cups story, McGhee brings us to Lewiston, a struggling former mill town, in Maine, the whitest state in the country. Starting in the 1990s African refugees began finding their way to this quiet small city with low rents and starting their own small businesses to revitalize the downtown. Cecile Thornton, a white Mainer from a Franco-American family who had all moved away, encountered her African neighbors when she sought to break through isolation by reclaiming her ancestral language. When she couldn’t find anyone interested in practicing their French at the Franco Center, she was pointed toward the French Club in Hillview, a subsidized housing complex. She was surprised to find herself the only white person there, but gratefully began a conversation with Edho, a French speaking refugee from the Congo. Over the next year, Cecile studied and improved her French under the tutelage of her African neighbors. They became her community. Today she volunteers to help asylum seekers. Each brings their skills to help the other and the lives of all are improved.

This story makes me think of a particular Three of Cups: the one from the Numinous Tarot where the three celebrants are actually pouring out their cups of different colors into a well or maybe it’s a magical cauldron. As they do, their mixing liquids take on a new hue and are filled with stars. An illuminating flame seems to rise from the shared waters. The sharing of their abundance is creating something even greater. The pool is full to overflowing! 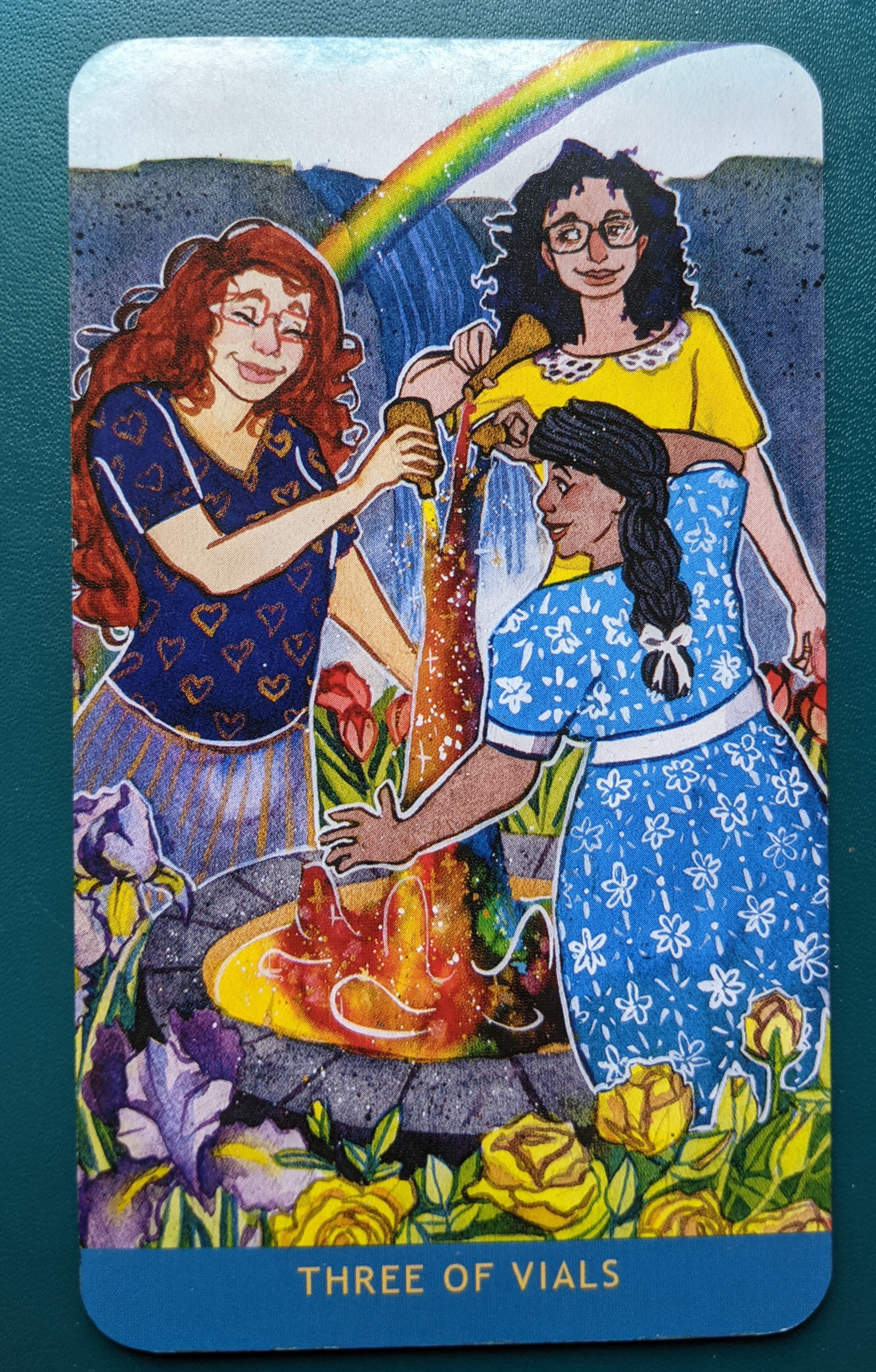 From The Numinous Tarot

The Solidarity Dividend and the Numinous Three of Cups give us visions to move toward, an inspiring destination for our Chariot journey. In the Rider Waite Smith version of the Chariot, the Charioteer is looking toward that destination, but we, the viewers, see only what is being left behind: a walled city. This is a powerful metaphor for what racism has done to us in the United States: divided us from each other, kept us from working together for the common good, trapped us in the institutions and policies made from a scarcity, zero-sum mentality. But the call of the Chariot is clear: leave behind that city and take off toward a more abundant life. 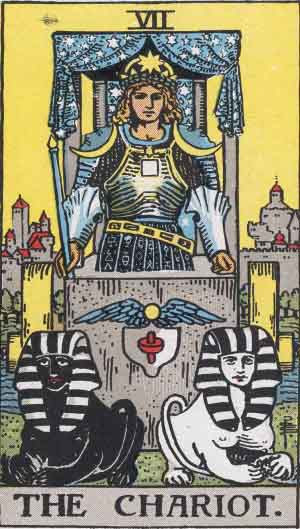 McGhee ends her book with:

Since our country’s founding, we have not allowed our diversity to be our superpower, and the result is that the United States is not more than the sum of its disparate parts. But it could be. And if it were, all of us would prosper. In short, we must emerge from this crisis in our republic with a new birth of freedom, rooted in the knowledge that we are so much more when the “We” in “We the People” is not some of us, but all of us. We are greater than, and greater for, the sum of us.

Yes, this is what we could be if we would get in our Chariots and ride toward that vision.

To help you explore abundance in your life, you can use these questions for reflection and/or card play:

ABUNDANCE: What is abundant in my life that it would be beneficial to share?

PATH: How to move forward with sharing this abundance?

VISION: What can become real when my abundance is shared?

Want to diver deeper into the inspirations for this moonth’s themes? Visit T. Susan Chang’s website to see all that she has on offer and order 36 Secrets from there. I highly recommend reading all of The Sum of Us. You can get it from the library or your local bookseller. Heather McGhee also has a TED Talk on what racism costs everyone.