A new moon arrives Monday, September 6th (exact at 8:52pm ET) calling us to work with our “accumulations of substance” for both body and soul.

We are on the path of the Hermit, who in the iconic Rider Waite Smith deck raises a lantern into a vast sky while standing on a mountain’s rock surface. Hermits are of the earth, but not of the earthly, material preoccupations of civilization. They have left the human world behind for a time to commune with the natural world and their own essential selves.

Ellen Lorenzi-Prince’s Minoan Tarot takes this inspiration coming out of the Rider Waite Smith influenced tradition and adds another layer of beauty and wisdom. 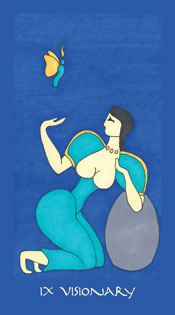 Ellen names the Hermit the Visionary and tells us:

The Visionary watches for souls. She sees where they live and where they go. She can send her sight to travel with them. Souls have a brightness that draws her to them. She seeks to discover their origins and destinations, their meaning and purpose, in this world and beyond. The Visionary does not lose herself, but remains grounded through her affinity with the stone. She brings profound knowledge and inspiration down to Earth.

This Visionary Hermit’s ability to sense the light of the invisible Soul is made possible by her absolute connection to the visible, material earth.

Our Hermit path this moonth passes through the very earthly  garden of the Nine of Pentacles. 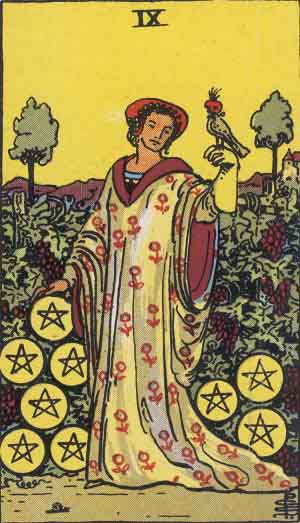 It is from T. Susan Chang’s writing about this card in her 36 Secrets that we learn examining our  “accumulations of substance” is the work of this time of year. This phrase captured my attention and sent me to dictionary.com to look more closely at the meaning of each word.

This Nine of Pentacles passage calls us to look at the reality on which we stand, a reality we have built up and now must move through. To consider the “accumulation of abundance” all around us.

What “accumulation of abundance” calls your attention first? What is abundant in your personal world? What abundance do you see in the wider world?

Last week water was plain to see and in abundance where I live and all up and down the east coast as Ida pummeled her way northward. Ida, the hurricane, is a natural occurrence, but her strength and dangerousness were amplified by an invisible abundance created by human activity: carbon in the atmosphere, the catalyst of climate change. Ida’s cost in property damage is staggering while the loss of so much life is an abundance of sorrow beyond calculation. Ida is a substance of grief we cannot ignore.

The chaos-causing, grief-inducing rapid change of our lives today could be paralyzing. Some days I read the news and freeze before the deluge. My reality is like Muriel Rukeyser’s in her 1968 Poem: Most mornings I would be more or less insane.

Despite the insanity, Muriel tells us she does begin to write. She doesn’t ignore that she is made insane by war and death, ceaseless consumerism, but writes out of that feeling to answer a call from the unseen and unborn. She wants to leave them something other than the wars of her time so she remembers different ways of being offered from the past— the men and women who considered a nameless way of living, of almost unimagined values—and then she images those to come inspired by that tradition who will be dedicated to peace, love, and reconciliation. Those who will try by any means / To reach the limits of ourselves, to reach beyond ourselves, / To let go the means, to wake.

Kendra Pierre-Louis in her essay Wakanda Doesn’t Have Suburbs from the anthology All We Can Save calls us to wake up, too. To wake up to the stories we are told that paralyze us, and then to start telling different stories just as Muriel Rukeyer did. Pierre Louis asks us:

What if, instead, the story we tell about climate change is that it is an opportunity? One for humans to repair our relationship with the Earth and reenvision our societies in ways that are not just in keeping with our ecosystems but also make our lives better?

If it doesn’t sound possible, ask yourself: Why not?

Yes, why not? True, the necessary response to the climate change already underway requires a rapid re-orienting of our lives and a massive re-directing of resources on a global scale. That’s a big lift. But we just freaking did that in the pandemic!! Shutdowns rolled across the globe and within weeks massive numbers of people re-oriented to working and learning at home. Governments directed massive amounts of money to ease the transition and develop a vaccine.

We could take the climate catastrophes as a wake up call. We could recognize we just had a practice run during the pandemic in re-orienting our material world and habits. We could tell ourselves, “We can do this!” We could.

It won’t necessarily be easy to act on this realization—this affirmation—that we could make these changes. But the Hermit’s guidance this moonth points us toward the sources of strength that can help us through: our souls that are being tumbled and polished, broken open and liberated by the challenges of our times.

The soul is hard to define. It is a connector between this world and the Greater Than so exists beyond language’s boundaries. But the other day I was thinking about the soul as the Major Arcana of the self; the 22 Major Arcana cards of the Tarot are often said to be archetypes. Then this past weekend when defining archetypes my Mass Tarot collaborator Jill Scott called them the original model, the primal essence. It clicked in my mind that our souls are our essential selves.

The pandemic has brought so many of us to consider what is most essential to us. And often it has been basic needs or simple pleasures that have risen to the top: a place to walk outside, connection to family, cooking good food, companionship, going to the library, a living wage, work that matters. And these soul needs and pleasures have moved us to change our lives. Our change work is also soul tending work. Our changing world is—not gently, but inexorably—growing our souls.

How shall we move forward doing both the work of the soul and the work of the world? Our third guiding card of the moonth suggested the attitude to take in this work: The Knight of Pentacles, the one who is in service to the earth. A favorite version of this knight and one so appropriate to the times we live in is the Knower of Stone from Rachel Pollack’s Shining Tribe. 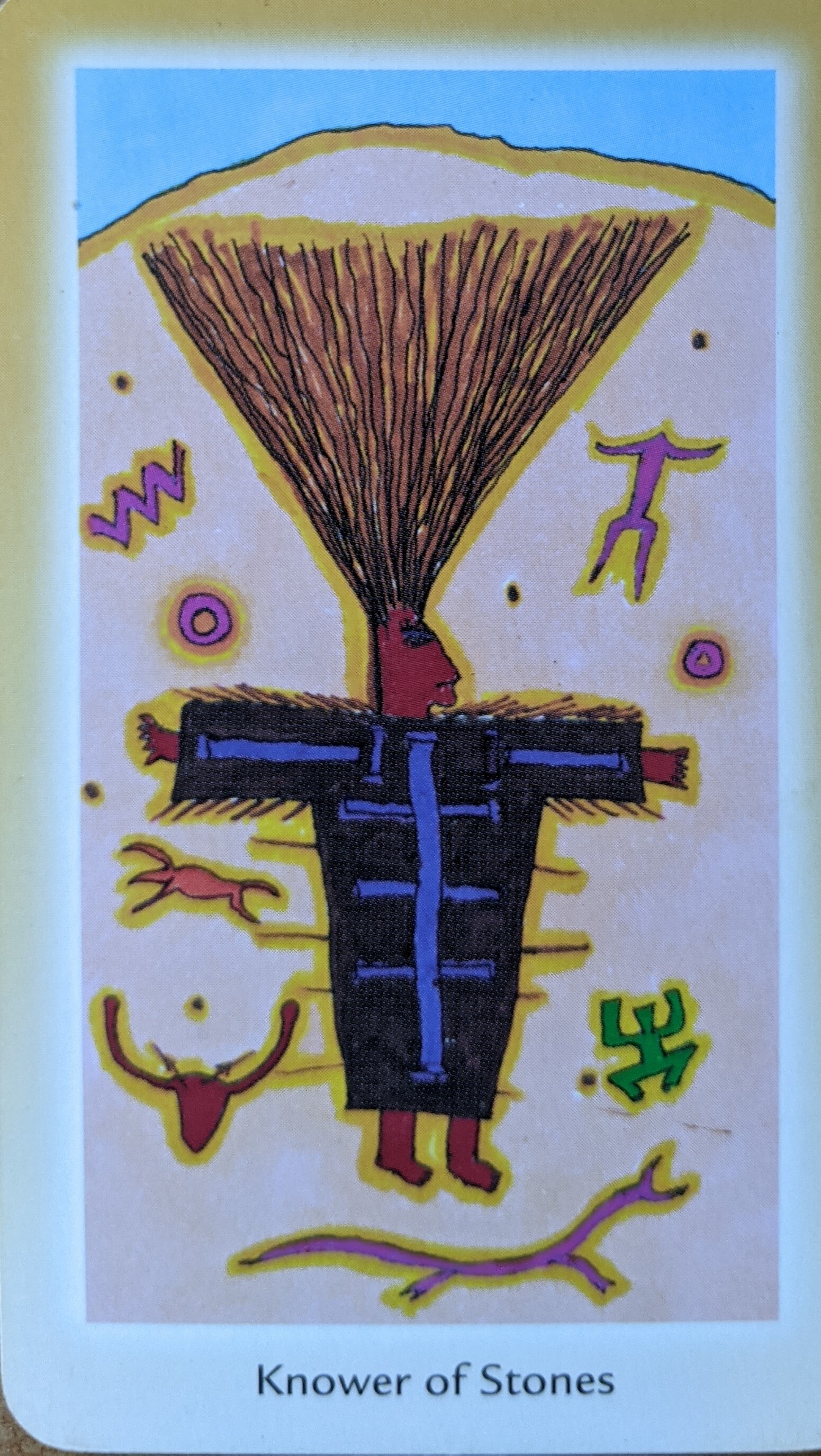 Here we are with our hair and our whole nervous system on fire from all that is going on! But the Knower is connected to earth and to the ancient earth-honoring traditions (as seen in the symbols surrounding the figure). This keeps them—and so could keep us—from flying off the earth in these wild times. This connection is practical, reminding us to use and reclaim practical ways of working with the earth (working with herbs, canning vegetables, re-using rather than buying new or recycling). It is also soulful, calling us to see the sacred in the earth. Rachel ends her description of this card with: to truly Know Stone means to transcend the illusion of a separation between Spirit and the material world.

And when we see our world as both beautiful material and awesome spirit, how could we not at least try to save all we can of this place we call home and ourselves along with it?

To help connect with the invitations of this moonth, you can use these questions for reflection and/or card play:

WORLD: What earthly abundance am I called to acknowledge and work with at this time?

SOUL: What of my essential self is abundant at the surface and calls for expression?

HARVEST: How can I harvest this abundance during the moonth?