The height of this moonth’s cycle comes with the full moon arriving on Wednesday, the 20th (exact at 10:57am ET), and offers a revelation about how the lunar energies initiated on the October 6th new moon are developing. The new moon, guided by its association with Justice, the 3 of Swords, and Queen of Swords, invited us to truth telling and the healing potential of flowing grief. Out of the full moon revelation about this developing energy, we are issued an invitation to return a gift to the world in the final weeks of the lunar cycle. 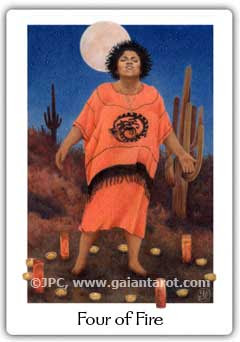 The Gaian Tarot’s Four of Fire shows us ritual as an organizing structure to hold the power of truth and grief. The structure suggested is …

Supported by such a structure and the sight it encourages, our truth telling becomes more grounded and perhaps complex. Paradox is allowed and also compassion. Still the heart remains a dragon protective of the shining humanity of each and everyone. All while standing within our own power.

Stepping into the organizing structure of the Four of Fire on a full moon night, we inhabit the archetype of the Emperor, who in their most positive potential, is one who leads through serving. In the Tarot of the Crone, deck creator Ellen Lorenzi-Prince speaks these words to those who would be Emperors:

Is the Great Plan

Is how you may serve 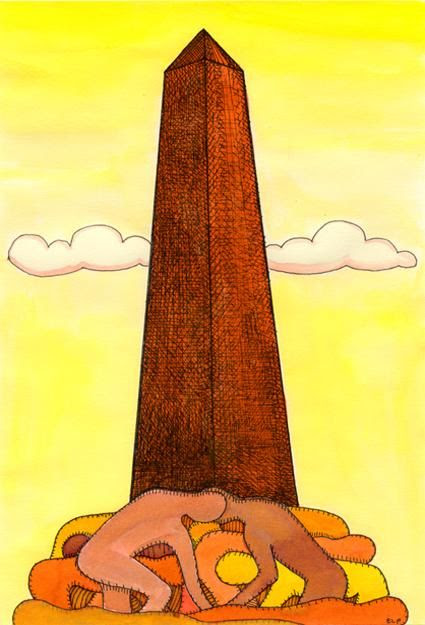 With our solar eyes we might see the image’s towering obelisk as The Emperor, but with our eyes adjusted to lunar looking we recognize the obelisk’s foundation is the people below. Without a foundation the obelisk would collapse.

Perhaps on this full moon night, Emperors will hear the call: Act in service to your people or see your power collapse.

Perhaps on this full moon night the people will hear the call: Recognize the power in your hands held out to others. Join hands and make power bow to justice.

To encourage a revelation on truth telling, justice, and power as we continue through this moonthly cycle, you are invited to one, some, or all of these practices:

When you are done, remember to offer gratitude for what you have received. Consider what gift you now want to return to the world. Pulling a card for guidance on the gift is always a fine thing to do. In the coming weeks and before the moon returns to dark around November 2 offer your gift to the world.