We’ve had a long wait for fall here in New England. For months, we’ve been looking at the trees and wondering when the bright reds will appear and yellows overtake the green. Naturally some years are more muted than others, but this warm year it’s the timing that has changed. Only during this last week in October have full color and seasonal temperatures really arrived. Leaves are finally making a brilliant splash before they let go, lay their color down on the earth. 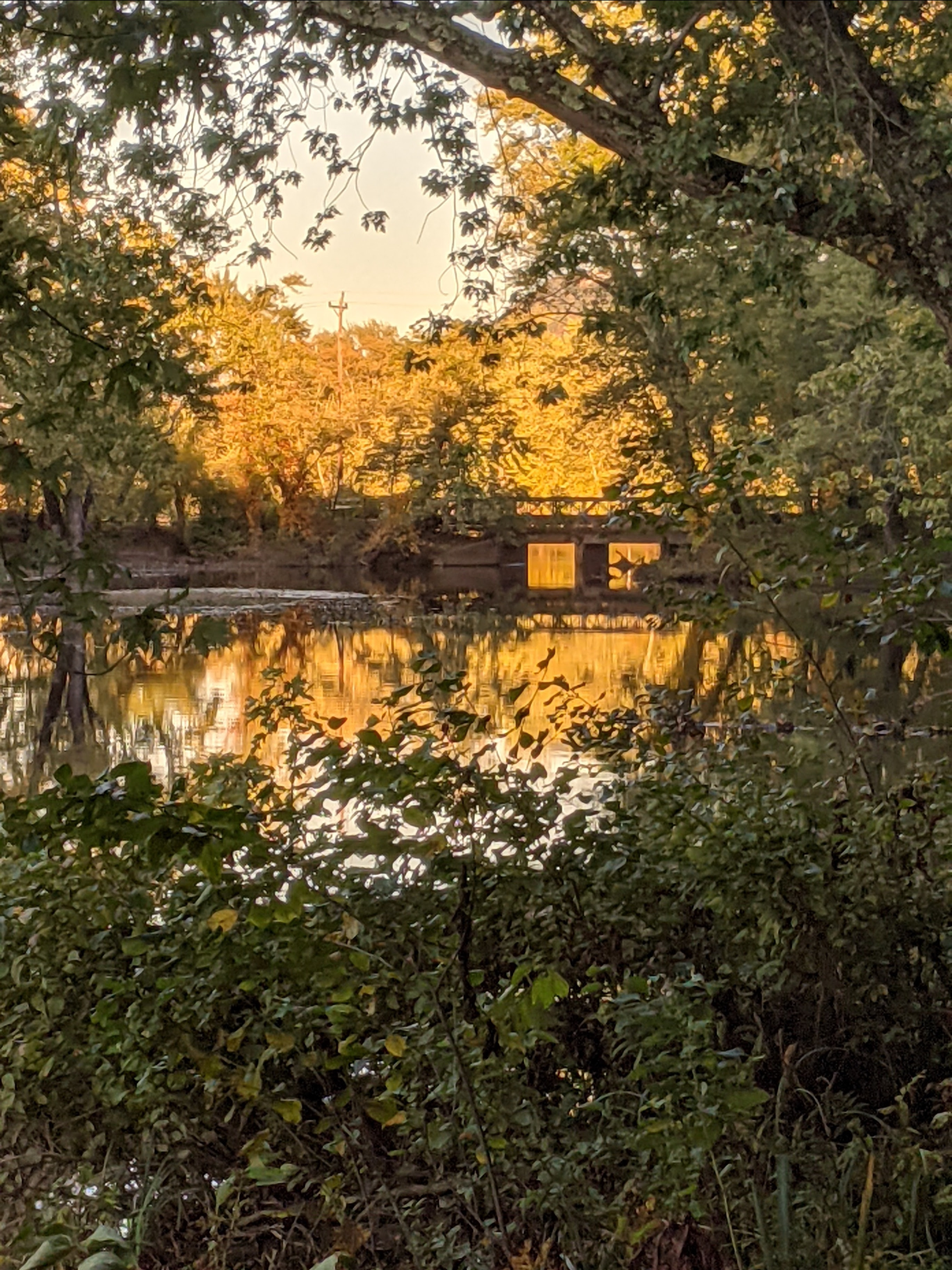 You could say we have been waiting for Death (the path we will be walking in the moonth that arrives on November 4th). Leaves turn color because trees stop producing their food through photosynthesis. Green is the color of growth and food making, but the trees in fall pause their life seeking and prepare to hunker down for the winter. The yellows and reds are the signs of trees’ surrender. When leaves fall and eventually brown and blend in with the soil, they become the compost to feed next year’s growth. This is a natural cycle where Death is the partner of Life. Life’s seasonal lessening stirs up our emotions, but because it happens each year we have practiced how to work with these emotions. This is the kind of Death that has a place in our lives. 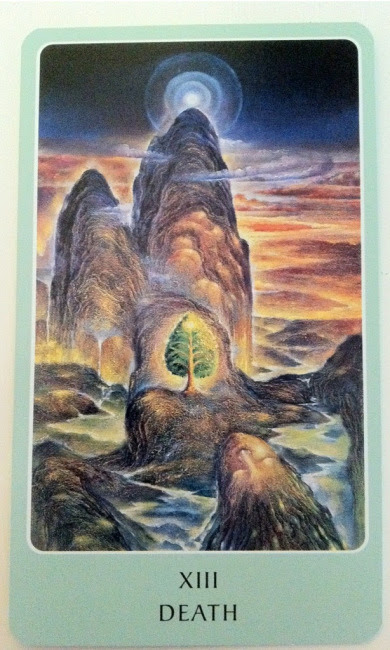 From Tarot Roots of Asia

Fall’s strange timeline this year shows us how Death is not behaving as it should. We are in a time of unnatural Death. The Death of a pandemic where public institutions fail, of the greed of corporations and congresspeople limiting action on the climate crisis, of racial and income inequity determining access to vaccines and health care across the globe.

The most striking image of unnatural Death I saw this week is of five young climate activists on hunger strike sitting in wheel chairs in front of the US Capital. They started their strike on October 20th calling for a Green New Deal and aggressive climate action to be included in the reconciliation bill being negotiated in the US Congress.

A hunger strike is an extreme social change strategy and a dangerous one. Hunger strikes are most often undertaken by prisoners who have no other avenues for demanding change. Yet these young people—the oldest is 26—have found it necessary to use this dramatic strategy. We can begin to understand why when we watch Abby, a 20 year old hunger striker, encounter Senator Joe Manchin, who has blocked climate provisions, leaving a donor luncheon. When she tries to talk to him about the importance of climate change, he dismisses her and tells her to call his office for a meeting. As he drives away, she yells, “Young people want to live.” (See the full exchange in a video posted on their Twitter page @HungerStr1ke)

This unnatural Death at the center of our political life asks the question of each of us: What can I do to tip to balance back toward the natural alignment of Death with Life? Maybe it is a call to your congressperson. Maybe it is joining a group where you live to take action on the climate crisis locally. Maybe it is action on a different issue that intersects with climate. The hunger strikers have their own action suggestions.

Despite the grief, weariness, and uncertainty that comes with living in a time of unnatural Death, we can be spurred to keep moving forward byinspirations coming from both the future and the past.

The future-oriented inspirations are the statements of the hunger strikers. Kidus, the oldest at 26, says: “I’m hunger striking because I believe we can win. I’m fighting for my mom who is an in-home caregiver, the people in Texas who died during the TX Freeze, and my future children. … I’m striking for everyone I’ve ever loved and I won’t back down until Biden invests in us, our futures and his own agenda.” I say it is better to get behind Kidus’ belief in the future than to tear it down.

From the past comes the ancestors who surely want their descendants to have a future. As we enter the days of ancestral remembrance we can ask for their loving power to shape a better future. The alignment of traditional celebrations and the new moon give us a long visit with the ancestors this year. Actually since 2012 when my partner John died on November 3rd, I have thought of these days as the Twelve Days of the Dead:

The evening of October 31st is Threshold TIme: On this night you might set your intentions for the days to come. Send a greeting or a love letter to beloved dead and ancestors. Gather pictures of your beloveds and give them a long loving look. Take a ritual action to indicate you are turning your attention from the visible world to the invisible world.

November 1 and 2 are Communal Celebrations: Whether you regularly practice or not, the energy of these days calls us to traditional practices for honoring the ancestors and beloved dead. Catholic and Pagan traditions of altar making, visiting family graves, religious services, divination, making offerings of food and prayer are well known for these days. If you are not Catholic or Pagan, you could go to your own tradition and undertake some of the ancestor practices from there on these days. Or create your own communal practice by gathering with a friend or two or more and tell stories about those you have loved who are now dead. Share your beloveds with others.

November 3 is Singular Communion: The first anniversary of John’s death in 2013 surprised me with the strong connection I felt to him so since then I have taken at least that day as a retreat that allows me to spend time with him. If you would like to hear more of this story or learn about a practice for marking death anniversaries, it’s all in my e-booklet The Eternity Box. November 3rd—or you could pick another in the 12 days—invites you to spend some time stepping out of the everyday world communing one-to-one with a beloved in the beyond.

November 4 is New Moon Atune: This year the new moon arrives amidst the days of ancestral remembrance and on the spoke of the Wheel of the Year associated with the Six of Cups. 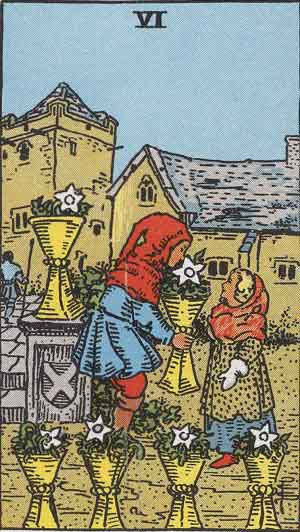 The iconic Rider Waite Smith image for this card is more than it first appears. At a quick glance, we see a sweet image of one person offering a cup with flowers to another. But look more carefully and new layers of meaning emerge. The one offering the cup is a youth and the one being offered the cup, though smaller, is actually much older. Especially when associated with the pathway of Death, the Six of Cups invites us to bring offerings to our far away elders, to those who have grown small in physical body, but remain as our ancestors. We might literally bring flowers to a place special to our ancestors, but the most important thing to bring is our love. This new moon the invitation is strong to tend a loving flow between the living and the dead.

November 5 to 10 is Tending the Flow: There are so many kinds of ancestors and you might want to dedicate each of these six days to making a connection to a different kind of ancestor. Along with your genetic kin, you could connect with:

November 11 directs our attention to those who have sacrificed: On this day we honor with collective ceremonies or personal remembrances all those who have lost their life too soon as they served others such as soldiers and civil rights activists, nurses and doctors.

The evening of the 11th invites a time of integration: Let yourself be with all that has happened during the time of ancestral remembrance. Offer your love but most importantly receive theirs for you. Then you become a conduit for bringing that love into the world and allowing its flow to feed a better future.

To really serve the flow we can take the King of Cups, whose great power is in receiving all emotions without being swamped by them, as our guide. 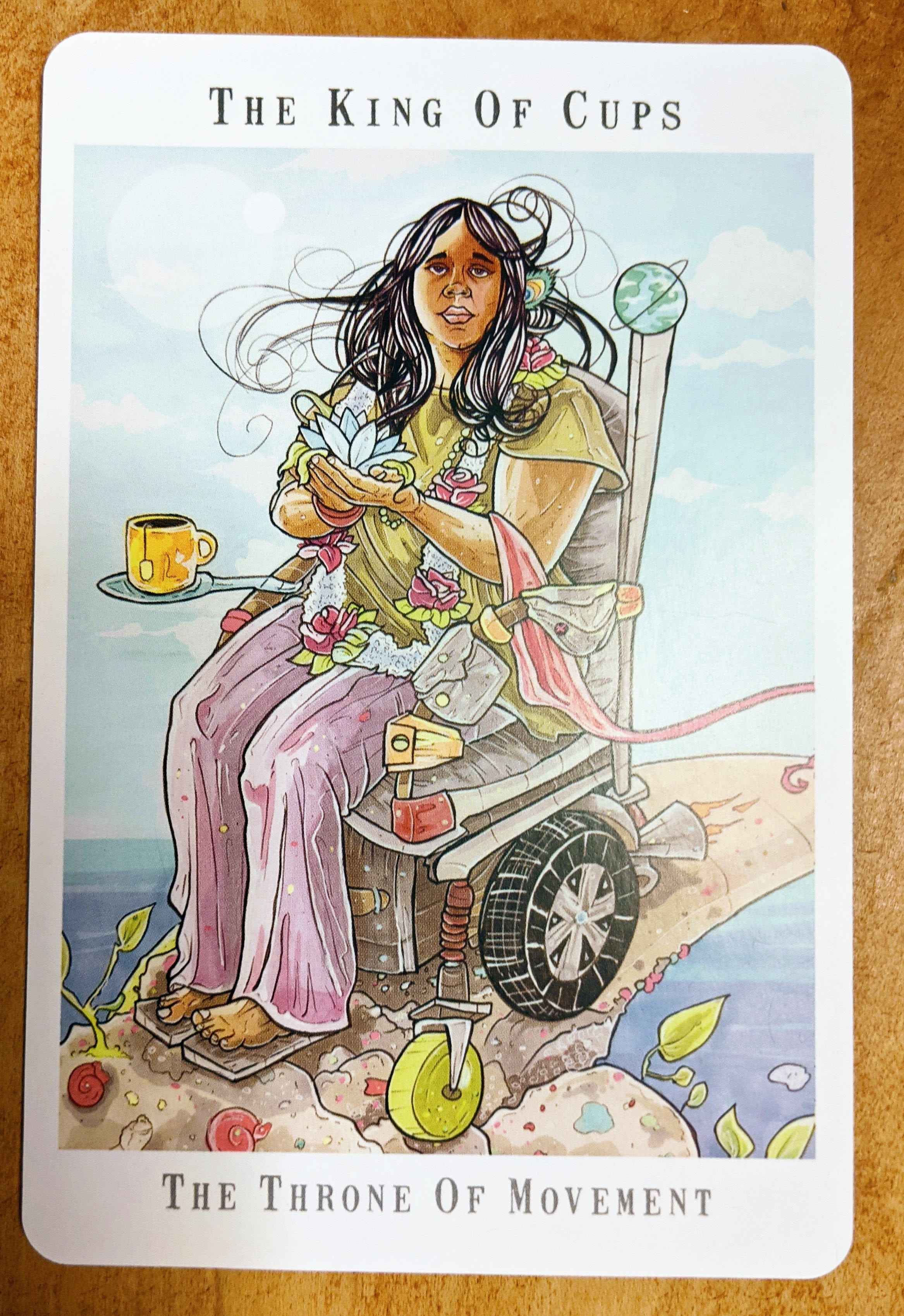 From The Next World Tarot by Cristy C. Road

These Kings are the ones who are able to hear messages passionately offered to them. They lean toward and receive the anger of a young climate activist or the feedback that their action is racist or ageist or sexist.  They might in the first moment be defensive—after all who wants to be responsible for making the planet inhabitable or called a racist?—but having worked with their emotions, they recognize this reaction as a defense and lay it down. Then their hearts are open to the other and to the message being sent. They fully receive the input and use it to make better decisions that serve the good of the whole. They know they are in relationship with the one offering the message. Their big hearts make their minds compassionate and their vision broad. Because of this they lead in a way that moves toward a future of right balance, one where Life flourishes and Death can’t be erased but it is natural.

To help you create alignment between Life and Death this moonth you can use these questions for reflection and card play:

ALIGNMENT: What can you do that supports right alignment between Death and Life this moonth?

ANCESTORS: How can you open to and support a loving flow between the living and the dead at this time?

FUTURE: What future will you be creating as you work with the invitations and themes of the moonth?

I do offer this as an e-reading in my collaborative initiative format for $23. Sign up with PayPal or email me about sending a check. As I mentioned above, I am on retreat this week and actually have worked out to be away and offline and until the 6th. You’ll hear from me after that and I’ll start readings in the order requests are received on the 8th (which after all is only a few days after the new moon).