The height of this moonth’s cycle comes with the July 13th full moon (exact at 2:37pm ET, time zone converter), and offers a revelation about how the lunar energies initiated on June 28th new moon are developing. Guided by its association with The Chariot the new moon invited us to put our hands into the fire of the now and still imagine and start toward a future we want to live in. Out of the full moon revelation about this developing energy, we are issued an invitation to return a gift to the world in the final weeks of the lunar cycle.

The exact moment of the moon’s fullness comes in the sign of Capricorn associated with the Tarot’s Major Arcana’s Devil.

The Devil is one of the trio of cards that make people fear the Tarot. (Death and The Tower are, no surprise, this figure’s fearsome companions.) This fear is triggered by The Devil’s portrayal in the Christian tradition as an all powerful figure of evil who stands in opposition to God’s light and goodness. But The Devil’s qualities are not consistent across cultures. There is no parallel figure in the Celtic tradition, for example, Though the horned god Cernunnos may have inspired some of the Devil’s iconography, his significance as a god of fertility, life, animals, wealth, and the underworld is vastly different from the Christian Devil. Neither is there a Devil figure in most traditional African religions; rather, as Courtney Alexander writes in the DustIIOnyx guide book, “humans and deities alike choose whether to navigate the world from a negative or positive disposition.”

The Jewish tradition offers yet another face of the Devil as we can see in this depiction from the Raziel Tarot. 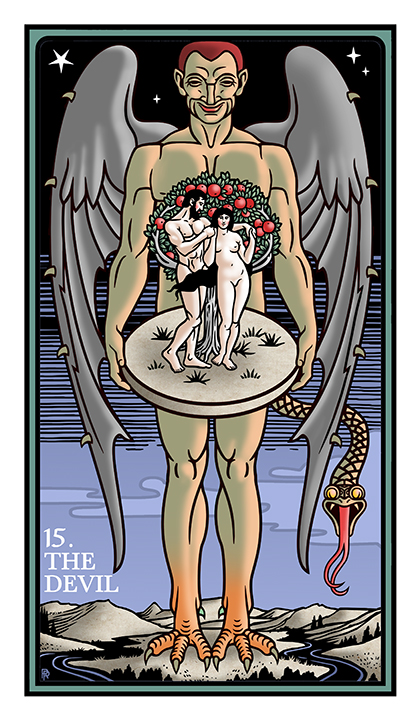 About this Devil, Rachel Pollack writes:

Quite simply, the idea of an all-powerful Devil, who was the highest and most beautiful of angels, who led a war in Heaven against God and was cast into the dark and fiery pits of Hell does not exist in Judaism … And while Jewish superstition, especially in the Medieval period and after, became more fixated on demons these all involved individual dangers. No great Devil holds the soul of all humanity in its grip.

So this chicken-footed figure with a pleasant face and orangish hair is just a trickster who seeks to keep us in his grasp. In the image, the Devil has trapped Adam and Eve who stand before the Tree of Knowledge, symbol of their disobedience to God, into believing that a world of constriction and punishment are all that exist.

But this Devil’s reach is also limited. He controls only the small space he can hold. The rivers and mountains beyond do not belong to him. This greater world waits for Adam and Eve to open their eyes and see the truth of the world’s vastness.

This limited Devil is the guardian at the gates of our forward movement to the future we want to live in envisioned on the new moon. This figure will block your way and test your vision, but the beyond beckons. Don’t let the Devil’s limits constrict you. Don’t believe that the world the Devil is trying to sell you is all that exists.

What about that snake in the image? Most images of The Devil include a tail and so we could assume the same here. But I’m struck by how this snake does not seem to be attached to The Devil, but is rather on its own,looking out from behind.

Snake is a multi-level symbol and in the earliest cultures is associated with the Goddess. In the Minoan culture of ancient Crete, the Snake Goddess figurine is shown raising both hands holding poisonous snakes; she has learned how to work with the snake’s toxins to create powerful visions. Ellen Lorenzi-Prince’s Minoan Tarot was inspired directly by art from this culture. Ellen said that she found almost no images of strife or violence. So when it came time to create The Devil she had to re-envision this figure as Ecstasy. 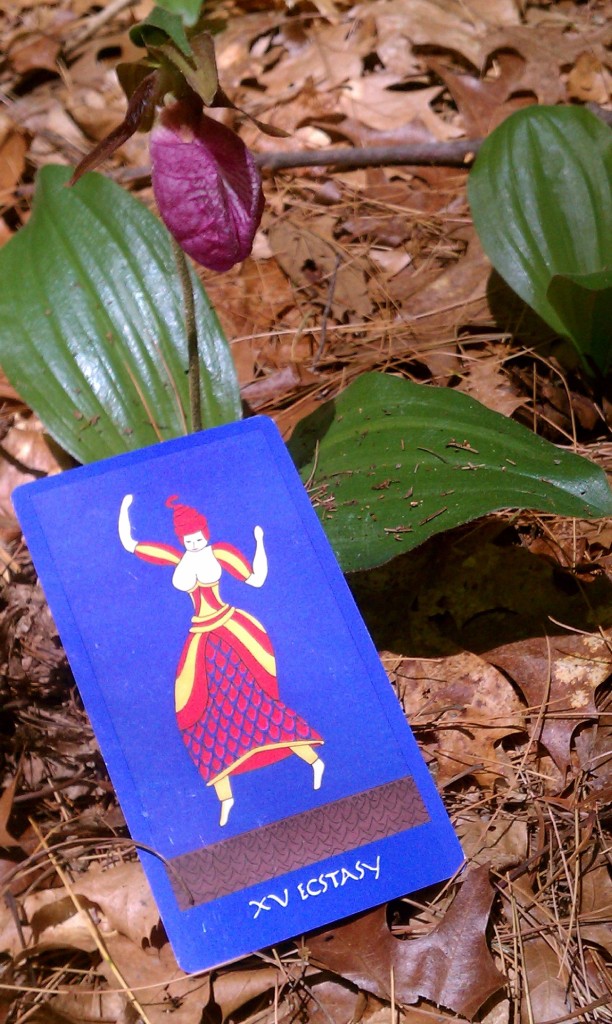 Seen here dancing in the wild!

This figure shows us our reward for daring to reach beyond the limits of the Devil and to dare to move forward in our Chariot. It shows us dancing with our soul

To encourage illumination about how to break through the limitations that arise as you work to create a future you want to live in, you might do one or combine all of these practices:

~ Take out any reading or your reflections from the new moon and look at them in a new light. How does your understanding of the cards shift now that time has passed and light has shifted? (If you haven’t done a reading yet, no problem, just do it now under the light of the full moon. You can try the one included in the new moon post.)

~ Bring out The Devil and Chariot cards from a Tarot deck and connect them to your new moon reading / reflections. You could place/imagine these cards on either side of your reading or above and below, and then look at how they add meaning into the story your original cards offered you.

~ Pull a card or two in response to a question such as: What limits can I break through now? How can I break through? What can confronting these limits teach me about how to create a future I want to live in? Engage in Visio Divina to find the layers of wisdom within the cards.

When you are done, remember to offer gratitude for what you have received. Consider what gift you now want to return to the world. Pulling a card for guidance on the gift is always a fine thing to do. In the coming weeks and before the moon returns to dark around July 26th offer your gift to the world.