I’m looking at the last week with the eyes of the Spiral of Fortune searching for where, to quote the poet Seamus Heaney, hope and history rhyme. 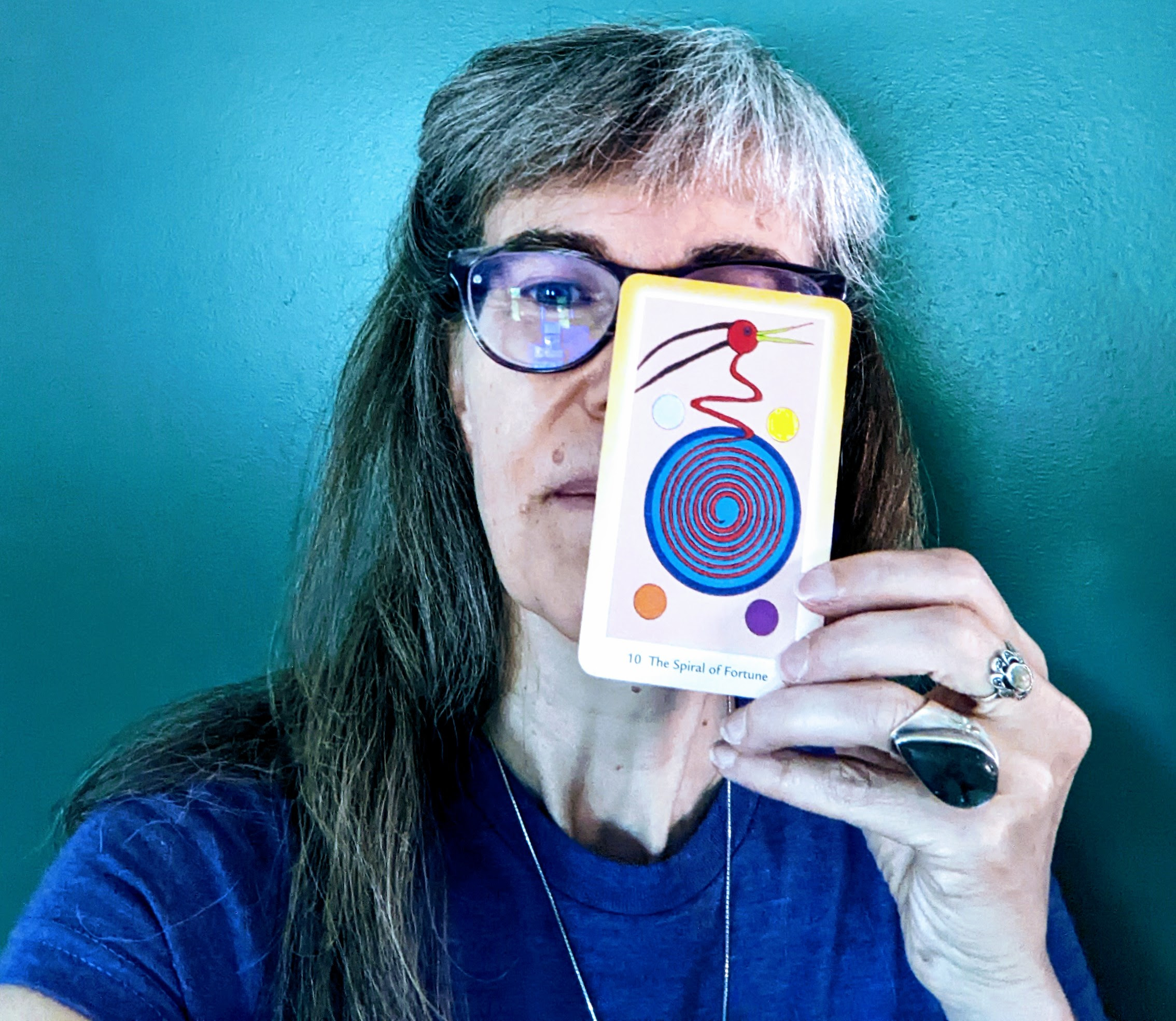 Our Strength moon with its invitation to collective leadership was still young last week, but already showing us its power:

Are these enough? No. No No..  Is this just a beginning if we want to move to truly transformative work? Yes. Yes. Yes.

But it is a beginning. And I do see the events of last week as breaking the spell of limited thinking about what is possible. They get us off the gerbil wheel version of change where we make the same moves but make no progress. They give us a break through to break free energy that had been sapped by the feeling that nothing changes.

From here we rise like the bird in the Shining Tribe’s Spiral of Fortune.

And when we rise, we get closer to the stars and can tap into the energy of the Tarot’s Star, the archetype that corresponds to the full moon arriving on Thursday, the 11th (exact at 9:35pm ET, time zone converter). On this full moon, we could say that the Star is offering a blessing to Strength during its lunation. 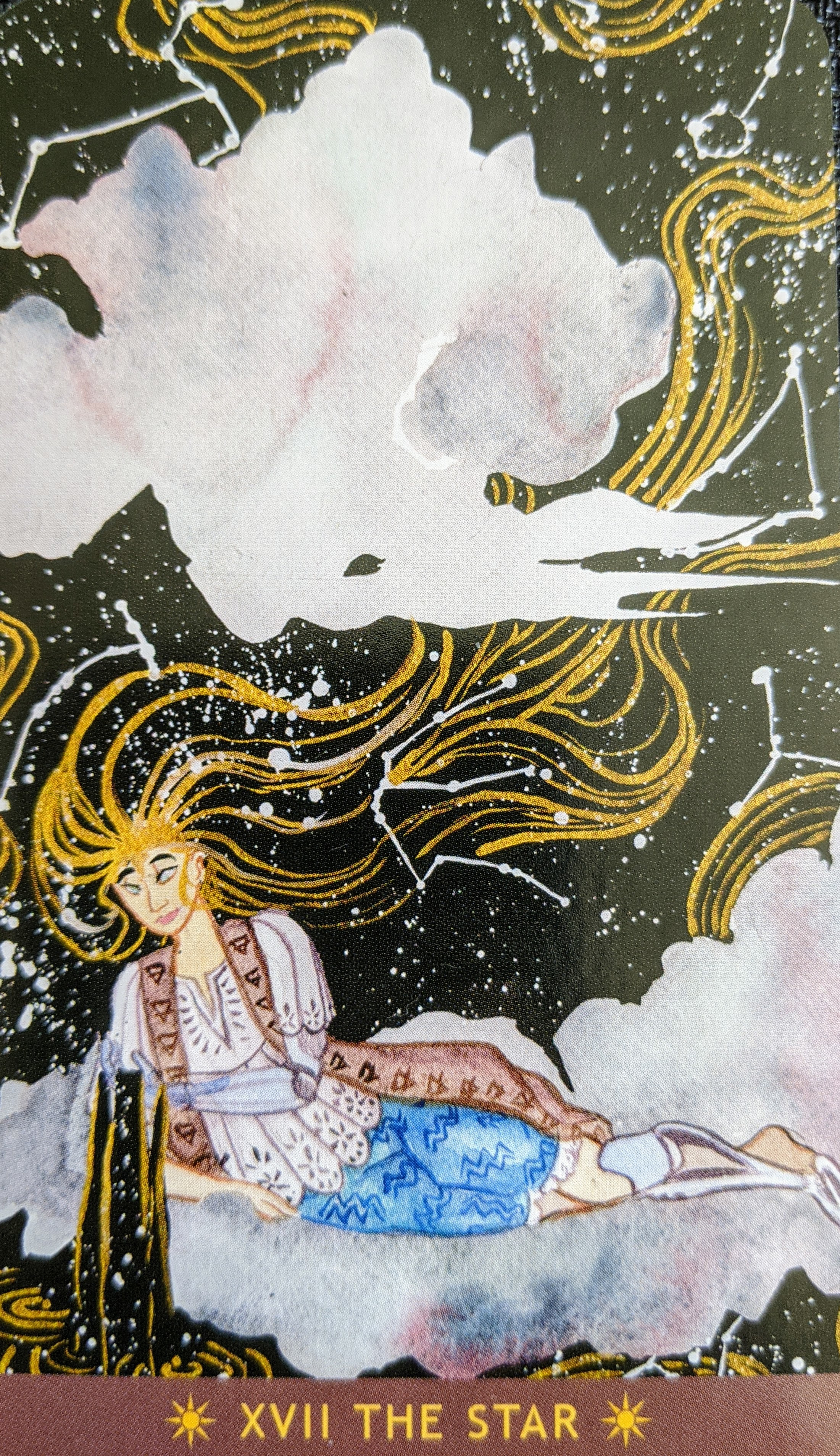 From The Numinous Tarot

In my Tarot for Your Soul manuscript, I write about stars as one of the 22 essential symbols of the Major Arcana:

Stars help us to see our place within the universe. They are guides to navigation and most visible in the darkest times. We may miss them on a cloudy night, but they always return. The ancient Egyptians called the circumpolar stars (those that orbit the North star and never dip below the horizon) the Imperishable Stars, recognizing them as a gateway to eternity. A layer over the stars’ general meaning of constancy and support can be added by looking at the shape of the star in the image. Egyptian stars were five pointed inspired by the starfish of the Red Sea. A six-pointed star unites two triangles, one signifying the female and the earthly and the other the male and the heavenly. An eight pointed star is very common on Star cards, making a connection to the infinite (the infinity symbol is an 8 on its side) and the Magician and Strength cards that often include infinity symbols in their images. The stars are magic for times when we need strength.

Was there magic involved in the happenings of last week? Well, I can’t help but notice that Starhawk began her Magical Activism series in July :).

For the first session, we gathered virtually for meditation, ritual, and to discuss the alignment of the stars. To be a part of the series, we also had to commit to taking action outside of sessions because, as Starhawk explained, magic needs a container in which to manifest.

The container I am doing activism within in the lead up to the US midterm elections is the Working Families Party, which is building a multiracial party of working people to transform the country. I got involved because I share their values and trust who they endorse for candidates. I keep going back because of what we might name as another kind of magic: the weaving together of purpose and fun in a group of diverse people. Being in Working Families Party events lets me get a taste of the future I want to live in: democratic, multi-racial, respectful and welcoming of all, dynamic, and fun! It’s a future of collective leadership creating a world that works for all people, creatures, and the planet.

Experiencing the future I want in the now we have certainly seems like magic to me.

So in these nights where Strength meets the Star you are invited to make your own magic by living the future in the present. Do or be in a way that invokes your highest and deepest visions. In that hour or moment when you are living the future in the now, you will become like a star. As more and more of us live this way, our light will gather into constellations, into whole galaxies, into the Imperishable Stars that guide us surely and safely into that future we have created together.

To encourage a revelation on these themes as we journey through this moonthly cycle, you are invited to one, some, or all of these practices:

~ Take out any reading or your reflections from the new moon and look at them in a new light. How does your understanding of the cards shift now that time has passed and light has shifted? (If you haven’t done a reading yet, no problem, just do it now under the light of the full moon. You can try the one from the new moon.)

~ Bring out your Strength and Star cards from your Tarot deck and connect them to your new moon reading / reflections. You could place/imagine these cards on either side of your reading or above and below, and then look at how they add meaning into the story your original cards offered you.

~ Reflect on questions such as: What shift is happening in the wider world now? What shift is happening in me? How to work with these shifts to move toward my highest/deepest vision of the future? How can I live the future in the now? You could, of course, pull cards as responses to any of these questions. You may want to engage in Visio Divina to find the layers of wisdom within the cards.

When you are done, remember to offer gratitude for what you have received. Consider what gift you now want to return to the world. Pulling a card for guidance on the gift is always a fine thing to do. In the coming weeks and before the moon returns to dark around August 25th. offer your gift to the world.