As the season turns, we are nearing a completion here in the Northern Hemisphere. The landscape is green (if a little dulled by drought here in Massachusetts) and the fields full, but growth has slowed. The sounds have shifted; the birds are quieter and the cicadas’ hum solemn. We are turning toward the final harvests.

The August 27th new moon (exact at 4:17am ET) astro-Tarot correspondences also point us toward this theme of completion as we are invited to walk the path of the Hermit, Major Arcana number 9, the last single digit. 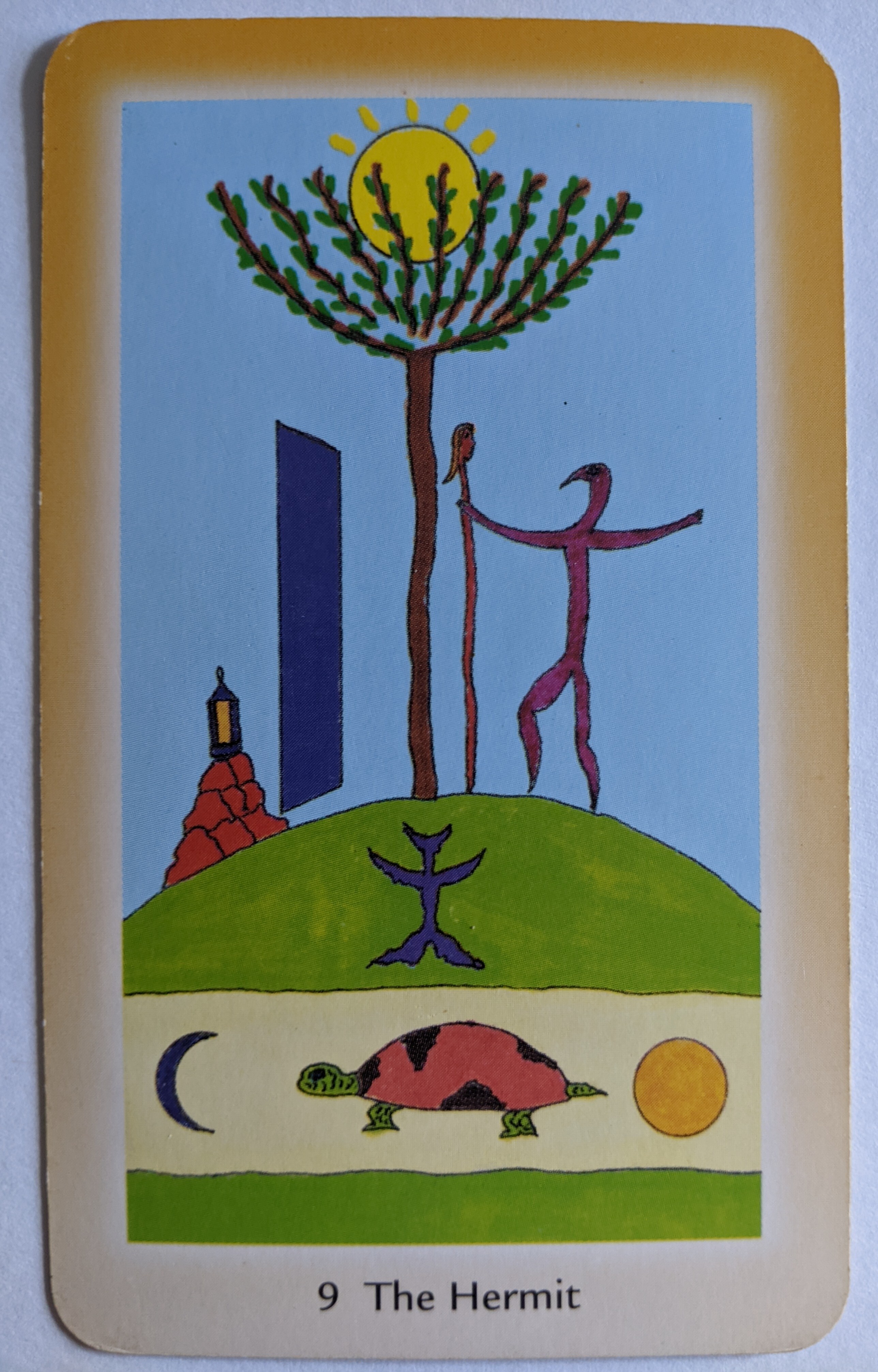 From the Shining Tribe

Hermits turn from the demands of the everyday world and embrace solitude to seek the wisdom within. Paradoxically, this looking inward also tunes them into the wisdom that flows from natural cycles, the Greater Than, and all that is beyond themselves. They integrate their personal insights with the larger patterns to find an understanding of the Whole.

Once in touch with their Inner Wise One, Hermits are called to return and share their insight with others. The lantern that is so common in versions of this card signifies this responsibility. Their periods of solitude are not permanent but periodic. They are still called to serve the communities from which they come, to respond to the needs of the world in which they live.

Being numbered 9 is apt for this card because to embody the archetype of the Hermit is an achievement that marks a cycle of growth’s completion.We may not be as old in years as the figures shown on Hermit cards, but we still have aged our wisdom selves when we’ve embraced a Hermit time.

So the path of the moonth calls us to completion, but there is still work to do before we are finished.  Our passage of the moonth takes us through the 8 of Pentacles. 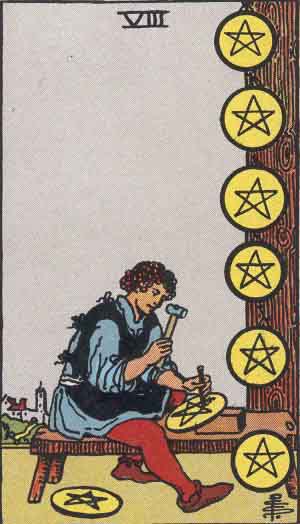 The call of this card is: Keep at your work. In the fields, we will only have enough for the winter if we do the harvest and prepare the stores now. For our spiritual life, faithfulness to our practice is what truly tends our soul. With our activism, the troubled times we live in show us a world in need of our tending and healing. We hear the voice of the 8 of Pentacles in Maya Angelou’s words: Nothing will work unless you do.

And how shall we do this work? What will we look like as we travel the path? The correspondences of the moonth call us to be explorers and questers devoted to the earth, traditionally known as the Knight of Pentacles.

These exploring, questing Knights are devoted to their cause but move at their own pace. Cedar McCloud writes about the Numinous Tarot’s version of Night of Pentacles known as the Explorer of Tomes: “While, like the other Explorers, there is movement in this card, it’s much slower. [They] are someone who takes their time, never rushing or making any hasty decisions.” 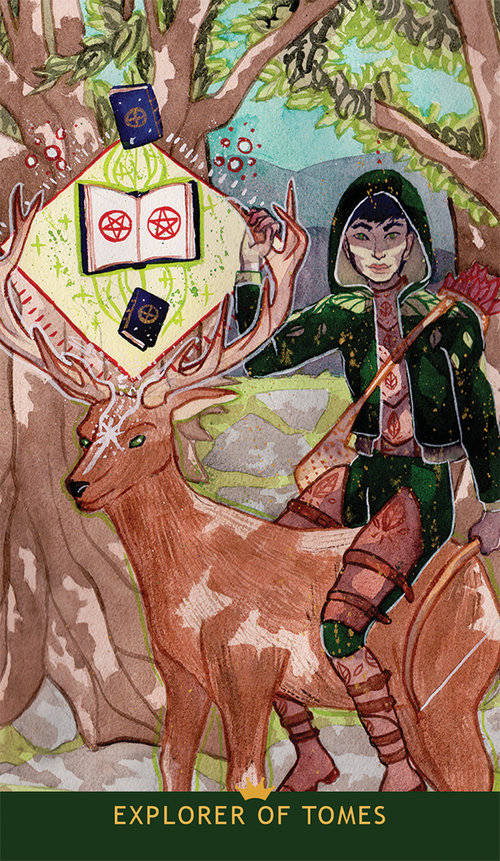 From the Numinous Tarot

When we traveled this pathway in 2019 the description and the earth connection of the cards had me thinking about Greta Thunberg, the Swedish teenager who began school striking on Fridays to demand action on climate solutions with a consistent weekly presence outside of the Swedish parliament. Her action of withdrawal of action through a strike aligns with strategy choices of an earthly Knight.

But Greta Thunberg is also a Hermit. In describing the origins of her activism, she says she first learned of climate change when she was 8 years old and didn’t understand why more wasn’t being done to address this global crisis. She became depressed and stopped speaking for a while. This time in the dark was the impetus to begin her school striking. Now she speaks to the world and helps to lift up the voices of other young people. Her light escapes her lantern when she tells us: “Our house is on fire. I am here to say, our house is on fire. … I want you to act as you would in a crisis. I want you to act as if our house is on fire. Because it is.”

What began as individual action, sparked a global movement of young people demanding action to address the climate crisis. I am lucky enough to have met some of these inspiring activists through my work at Mass Audubon’s Arcadia Wildlife Sanctuary which began organizing Youth Climate Summits for middle and high schoolers in 2017. The model has evolved to be youth-led and focused on systemic issues.

The Youth Climate Summit leaders realized that the program’s former focus only on micro level actions (composting or changing light bulbs at just one school, for example) actually makes young people’s mental health worse; they know it is not enough of a response to the crisis we face. So the leadership team shifted to work on macro level actions and intersectional approaches such as environmental justice and building bridges between the many groups working on climate in our area. They are also inviting younger and younger activists into their work. Last weekend, they hosted a Little Leaders Climate Convention for those 10 – 12 years old.

Looking at the example of these young climate leaders, we encounter the dynamic tension of this soul pathway: Hermits are at home in solitude; it allows for introspection to see the big picture, tend to their mental health, and come to know their unique wisdom. But Knights generally travel in groups; they know they are stronger together and everyone—no matter their age—has a role to play. The amazing turn around on national climate legislation (and my own state of Massachusetts’ passage of a climate bill despite last minute hesitations of our governor) show that persistent, collective action makes a difference.

This dynamic shows us that we don’t have to choose between being a Hermit or a Knight. In fact, often we can’t. All at the same time, we can be called to be the Hermit on the mountain top, the steady worker, and the Knight unfailing in service. When we embrace, blend, and express these multitudes within to match the needs of the moment, we can be more resourceful.

For the 2019 journey along this pathway, I wrote: “With increased resources, we just might find we have what we need to do the work, to achieve our visions, to reach completion.”  Today I am noting the conditional use of the word might. Reaching our vision was not assured then, and we are not done today. But the recent climate legislation leaps us forward. Achieving this major milestone on the way to our vision shows us that when we keep at the work like in the Eight of Pentacles we move forward. Let’s keep moving forward. Going back is not an option.

Reading of the Moonth

These questions are offered for reflection and to spark practice throughout the moonth. Pulling Tarot and oracle cards in connection to these questions is appropriate, but not absolutely necessary. You might carry a question with you on a walk for example and observe what is happening in the natural world as a way to find insight into the answer to the question.

HERMIT: What message does my inner Hermit have for me about how to keep at my work during this moonth/cycle?

EARTH EXPLORER: What message does my inner Explorer have for me about how to keep at my work this moonth/cycle?

INTEGRATION: How do I integrate these messages to serve the Whole (of which the Self is a part) during this moonth/cycle?

I do offer this as an e-reading in my collaborative initiative format for $23.  Sign up with Pay Pal or email me about sending a check. When I receive notification, I’ll be in touch to let you know about when to expect to receive your reading by email. I generally have openings to do these readings on Mondays and Saturdays. FYI, I am helping my dad deal with a medical emergency so my schedule is topsy turvey. I will do readings as I can on a first come, first serve basis.