The height of this moonth’s cycle comes with a full moon on Sunday, October 9 (exact at 4:54pm ET), and offers a revelation about how the lunar energies initiated on the September 25th new moon are developing. That new moon, guided by its association with Justice, invited us to open our eyes to the truth we most need to see at this time. Out of the full moon revelation about this developing energy, we are issued an invitation to return a gift to the world in the final weeks of the lunar cycle.

The astro-Tarot correspondences align this full moon with the Emperor archetype. Emperors are leaders at the head of institutions. They organize and structure. People look to them for direction.

As we know from our own lives and looking through history, there are inspiring Emperors and oppressive Emperors. 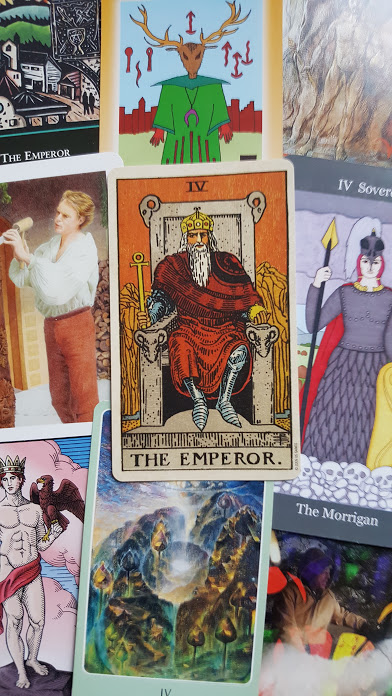 I, for example, have worked with women who have founded and led organizations dedicated to social, educational, and racial justice. They are my personal examples of the inspiring Emperor.

Oppressive Emperors exist, too, in both our personal lives and on the world stage. Vladimir Putin’s warmaking and Iran’s leaders’ repression of dissent currently fill our news feeds with death, violence, and grief.

What supports a leader to be inspiring rather than oppressive? Right relationship is a anchor.

Inspiring Emperors know that they exist within a web of relationships. The ties that bind them to people are strong and of the heart. They live their lives in service to these people. They honor and are guided by a connection to something larger than themselves, be it a principle, a moral vision, or the Divine.

In contrast, the primary relationship of oppressive Emperors is to their own power. Values and God may be invoked but only to serve  holding on to power. Relations are valued only as they serve this kind of Emperor’s hold on their institution.

Flashpoints of history show us what happens when the relationship between the people and an Emperor deteriorates. Protest and revolt against flare. Revolution may take place. Right now this is happening dramatically in Iran with a protest movement led by teenage girls and joined by women and men of all ages Hear their voices here and reporting from a Time magazine article by an Iranian-American journalist:

With every bullet fired and every arrest, the regime is shooting itself in the leg. The Iranian government wants to kill the messengers in order to conceal the truth—but for the Iranian people the truth is crystal clear,” a prominent journalist in Iran, who for security reasons asked not to be named, told me in a phone interview. “While we may not know how this will all end,” she added, “all know that we no longer want this governing system and regime.

The Emperor archetype is strongly connected to Justice. When laying out the Major Arcana in the three-linked rows of what is known as the Fool’s Journey, Justice and the Emperor are in the same column. In this arrangement, Justice visually appears as what undergirds the Emperor.  When there is injustice the foundations of the Emperor are rotted. Crafty, corrupt Emperors can shift around for a long time, but history teaches us that they cannot rule forever.

The bravery and truth telling of Iranian girls and women is opening a way for more just relationships and inspiring Emperors to emerge. In a world where the news is mostly of authoritarian leaders and movements rising, they are sirens of a different direction to be taken, They call us all to rise and defend Justice, to speak truth, to restore balance. They offer the whole world hope. (Suggestions for ways to support the Iranian protests are here.)

WIth Justice having initiated this moon cycle now coming to fullness, we find the world’s Emperors and our own inner Emperors (we all have some of this archetype within us) called to stand and be judged. How have we opened our eyes to the truth this moonth? Have we served the flow? What values have we made real? How have we served the Greater Than and Justice itself?

Those of us seeking to inspire rather than oppress enter this moment of Justice’s evaluation with an open mind and open heart. We welcome the feedback so we can keep growing in our ability to serve. We don’t need to worry about having done everything perfectly, but can gather information to find our way to doing things better in the future.

To encourage this kind of generative learning, you might do one or combine all of these practices:

~ Take out any reading or your reflections from the new moon and look at them in a new light. How does your understanding of the cards shift now that time has passed and light has shifted? (If you haven’t done a reading yet, no problem, just do it now under the light of the full moon. You can try the one included in the new moon post.)

~ Bring out the Justice and Emperor cards from your Tarot deck and connect them to your new moon reading / reflections. You could place/imagine these cards on either side of your reading or above and below, and then look at how they add meaning into the story your original cards offered you.

~ Reflect on the questions raised from the alignment of Justice and the Emperor:  How have I opened my eyes to truth this moonth? Have I served the flow? What values have I made real? How have I served the Greater Than and Justice itself this moonth? What kind of leader have I been? What kind of leader do I want to be? You can, of course, pull cards connected to each of these questions. You may want to engage in Visio Divina to find the layers of wisdom within the cards.

When you are done, remember to offer gratitude for what you have received. Consider what gift you now want to return to the world. Pulling a card for guidance on the gift is always a fine thing to do. In the coming weeks and before the moon returns to dark around October 22nd offer your gift to the world.