Moonthly Musings and Reading: The Power of Grief to Transform

The arrival of the new moon stamps the moonth with an initiating energy that shifts and develops through a cycle of growth, fullness, and descent that we can follow to practice lunar living in a solar world. Each moonth I look to the Tarot’s astrological correspondences for the new moon to find three cards (a [...] Learn more → 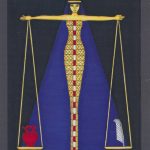 Full Moon Revelations: The depths are now part of your truth

The height of this moonth’s cycle comes with the full moon arriving on Sunday, March 28th (exact at 2:49pm ET), and offers a revelation about how the lunar energies initiated on the March 13th new moon are developing. That new moon, guided by its association with the Tarot’s Moon card, invited us to surface and [...] Learn more →

When not observing the Solstice seasons or special lunar happenings, I pull Tarot cards weekly to inspire practice that cultivates soul wisdom for readers of this blog as a group using the Gaian Tarot.  You are invited to use the cards below to inspire your practice, and, if you like, share your reflections in the comments.  [...] Learn more →

The Equinox arrives each year on March 19th or 20th. At this time of year, day and night stand equal inviting us to contemplate and connect with balances of light and dark, life and death, grief and joy. As we tend these opposites we may come to know how they each contain the other, and how [...] Learn more →

Faces and Spaces of Justice: Balance of the Minoan Tarot

In this moonth beginning on March 27th, we are traveling the path of the Emperor moving in visionary balance with the Queen of Wands. This combination invites us to connect with our power, but in its form of “power-with” which is described by the teacher and activist Starhawk as “influence among equals.” (Read more about [...] Learn more →